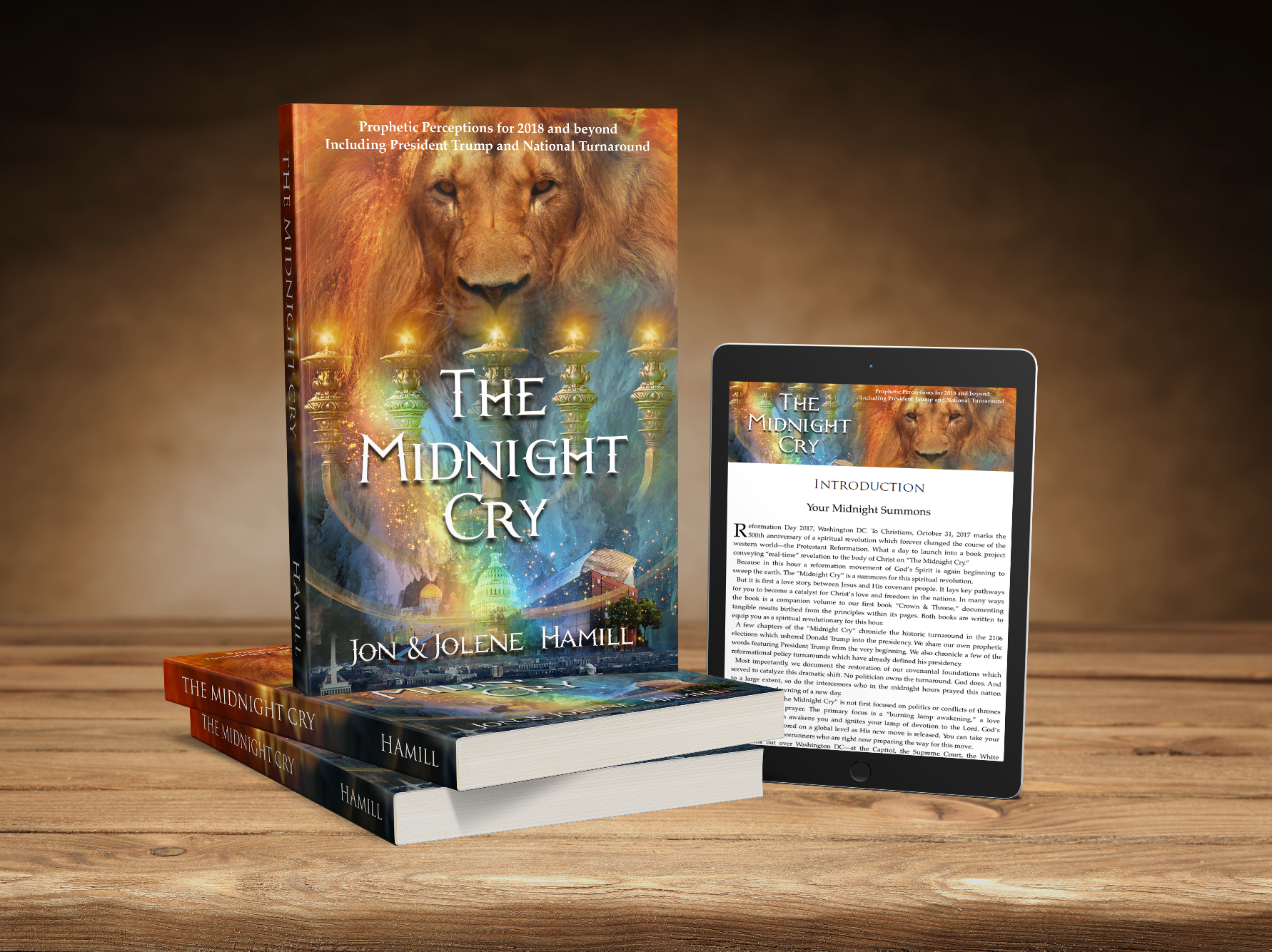 There are two ways to read The Midnight Cry. You can order a physical copy for $15 and it will be shipped to you, or you can purchase the eBOOK for $9.99 and download it immeditately. Note: For high quantity book orders or orders outside continental US, please email us at admin@lamplighterministries.net.

Written and released in just a month, the Midnight Cry is “breaking news” for the prophetic body of Christ. The book was officially launched on 12-12, 2017, the first day of Hanukkah, in concert with the Revolution 2017 gathering at the Museum of the Bible.

While penning our annual prophetic perspective for the coming year, Jolene and I felt strongly impressed that the subject matter in these pages needed to be expanded into a book, and released to bring clarity and enrichment to the broader body of Christ. We are in a midnight hour, marked by a season of both incredible crisis and unprecedented turnarounds.

And it’s time for a Midnight Cry!

Throughout the pages we cover key themes for 2018-2020. Including prophetic insights on Donald Trump as well as a clear chronicle of the historic national turnarounds now in play. We also convey key revelation regarding the ongoing exposure of betrayal, the conflict of thrones in Israel, the Mideast, Korea, and more.

Finally, we share vital insights for you on God’s move in the midst of this midnight hour. A burning lamp awakening! With clear demonstrations of God’s Spirit over these next few years which will even serve as a prototype for His work in a far darker hour of human history. Two biblical feasts are highlighted for 2018—2020. The Feast of Dedication or Hanukkah and the Feast of Tabernacles. You’ll learn the vital importance of both in this hour as well as gaining a key understanding of how you can enter into God’s new move.

But the most important theme of the book is the unprecedented invitation we all have in this hour. The immediate word of the Lord to each of us is to refocus our gaze on Jesus. Behold the Bridegroom. He’s coming. Rise up to meet Him!

We are in a midnight watch, in the midst of an ongoing midnight crisis. But God is turning the tables. And a cry is now being released which is unleashing a move of awakening in our land. We are beginning to shine with God’s glory. And a freedom procession is moving in the earth as we journey together to meet the Bridegroom!

Lets never forget this part. The Midnight Cry is ultimately a summons to a wedding. And this is your invitation.

The Midnight Cry highlights timely prophetic revelation based upon the parable of the wise and foolish burdens. As you will see, the Midnight Cry actually projects not only into the end of days but into every season of renewal and spiritual revolution that God initiates. In this 500th anniversary of the Protestant Reformation and the 70th anniversary of Israel’s rebirth, we are in such a season right now.

The book is dedicated to our Lamplighter family, with whom we have been privileged to make this journey of a lifetime. No King but Jesus!

1. The Midnight Cry: Prophetic Perspectives for 2018-2020. The book begins by sharing our prophetic word and focus for the new year, featuring key insights and warnings for 2018 and beyond. What is God doing right now?

2. Burning Lamp Awakening—As we awaken, it’s time to tend the fire of first-love devotion to Jesus. We share the miracle which occurred during our own wedding on the first day of Hanukkah, and how God is lighting the fire of His people today.

3. The Hanukkah Revolution—Hanukkah is a prototype for spiritual revolution today. This chapter provides insights on Hanukkah as well as the story of our yearly Revolution gatherings, a Continental Congress to set the course for the future. The chapter closes with a key covenant promise for a perpetual flow of covenant provision in this hour.

4. Conflict of Thrones—examines key conflicts with global implications including Israel and the Mideast, the prospect of a nuclear North Korea, the rise and fall of globalism, and more. Also shares a clear biblical overview of the “midnight crisis” in America leading up to the 2016 elections.

5. The Midnight Turnaround—the 2016 elections mark the beginning of an unprecedented turnaround for our nation. What results have already come in? What can we now expect? And what was the true catalyst of these elections? Clear prophetic revelation documenting the rise of the Trump presidency is featured, as well as an in-depth teaching on the Daniel 7:22 “Turnaround Verdict.”

6. Turn the Tables—You have a seat at His table! Jolene’s real-time prophetic word on turning the tables on systemic betrayers becomes the foundation for an in-depth exploration on communion. The Table of the Lord is a table of both intimacy and justice. Includes a breakthrough teaching on Mary of Bethany which will revolutionize your relationship with Jesus.

7. The Kingship Anointing—the saints are released to possess the kingdom. And both nationally and globally, Holy Spirit is now moving in power to shift His people into the Kingship anointing. But what does it mean to be a king? How can we learn and mature in our capacities as a king and priest before God? How can we become change-agents?

8. The Midnight Riders—Heaven is ready to ride! In this chapter we chronicle key encounters with the Lord by Jon as well as Georgia pastor Jamie Jackson, along with scriptural accounts of the midnight riders. We explore in-depth the breaker anointing and angelic assistance for your journey. Includes an overview of the forerunner anointing and calling in this hour, as the midnight cry begins to sound.

9. A Glorious Procession—God is on the move, and His people are beginning to shine they go out to meet Him. We highlight the Glory Train journeys and the restoration of God’s glory in concert with His covenant restoration. Note that the summons to a wedding is also an exodus, a freedom journey in a spiritual revolution against the forces of subjugation, idolatry and abuse. Let My people go!

10. The Bridal Canopy—remember that the Midnight Cry is a summons to a wedding. And He is inviting each of you to this life-changing affirmation of covenant! We explore the new Tabernacles movement, with major progressions in the Tabernacle of David expression now sweeping the earth. Includes information on our upcoming “Rome to Jerusalem” prayer journey which will conclude over the Feast of Tabernacles in 2018. The chapter concludes by chronicling perhaps the most impacting prophetic experiences in the book, which will set the course for the coming season of synergy and breakthrough.