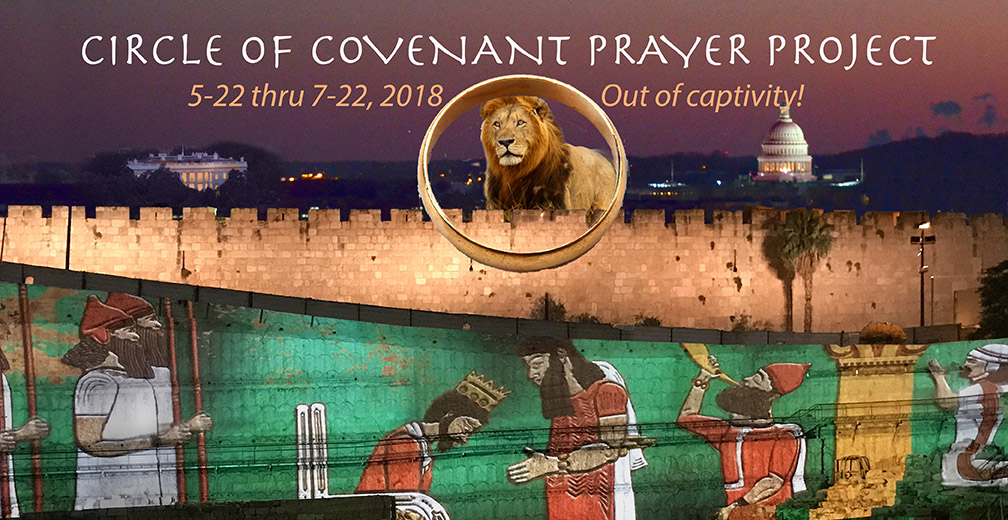 ED WATTS JOINS PRAYER CALL TONIGHT! 9pm EST. Ed is a profound prophetic leader, pastor in Michigan, good friend, and co-leader of the Rome to Jerusalem tour. Both of us received similar encounters from the Lord to share tonight! Conference call number: 641-715-3605 access code 552-690. Use *6 to mute/unmute. Invite your friends to join us.

DEAR POSSESSORS OF PROMISE,
FIRST—THANK YOU ALL for making the back to back prayer calls Monday evening such a success. An historic precedent was set as the prayer community nationally mobilized together to pray for President Trump’s summit with Kim Jong Un… at the request of Vice President Pence! Thanks to Mario Bramnick for making all this happen. It was profound to see so many leaders and movements join together for this call.

And our own Lamplighter call literally doubled in volume, with 421 people calling and praying together!

We are so looking forward to a special call tonight with our friend Ed Watts. You are going to receive key revelation—and impartation—to possess your covenant promise. Don’t miss!

The Seed Becomes Your Deed
It all started when James Nesbit insisted we go to God’s mountain of blessing. A certain fierceness in his voice meant there was no turning back…

Usually I’d be all for it, but the location of the Mount of Blessing in Israel is… lets just say… remote. So the logistics of bringing 100 intercessors on the Rome to Jerusalem tour to this mountaintop vineyard in the West Bank is beyond challenging.

Of course, I was the one who suggested the idea in the first place. So there really was no turning back.

Deep in prayer, I remembered a great winery we had visited on our first journey up to Mount Gerazim, the Mount of Blessings. I suggested it could be our first stop on the tour. Ed Watts was at first a bit skeptical of bringing 100 intercessors to a winery, especially first thing in the morning. It didn’t matter that the winery had won all kinds of awards, and the location would be a perfect place for communion. He didn’t budge.

Jeremiah’s Title Deed
But then I mentioned this winery shows a special film about Jeremiah the prophet. The winery is located is in the region of Benjamin, where Jeremiah buried the TITLE DEED to land he purchased just before the Jews were forced into exile. A prophetic word accompanied the title deed that the Jews would one day return, and see their vineyards restored. This began to occur when Israel was reborn in 1948.

Amazingly, this winery actually made an incredible film about Jeremiah’s prophecy.

Suddenly a light came on. And Ed Watts came to life.

Ed had just received a vision from the Lord about TITLE DEEDS being released. He had actually preached about it the day before at his church. The word of the Lord—title deeds were being released!

You’ll hear more about his word tonight. But suddenly we were going to Mount Gerazim by way of a winery.

Vision—The Seed Becomes Your Deed—Paid in Full!
Last Saturday while ministering the Lord brought me into my own encounter regarding title deeds. The Lord made it clear He is now releasing title deeds to many in the body of Christ. I saw a vision of a massive sea of title deeds, each stamped “PAID IN FULL.”

The seed becomes your deed. Ultimately, Jesus’ redemption on the cross forever secured your salvation and your covenant promise for the future. Including your title deed to the harvest fields He is calling you to impact in your calling. PAID IN FULL!

Paying the Price, Passing the Test
Note Jeremiah’s cousin Hanamel had offered the field to Jeremiah to purchase. Because he was family, Jeremiah had inherited the “right of possession and redemption.”

This is important to note. Jeremiah had a right to the land as his inheritance because of his bloodline. But he still had to purchase it himself. Likewise through the blood of Jesus, your inheritance and destiny has been secured. But there still remains a price to be paid for it!

Friends, many of you have gone through a severe season of testing recently. The refiner’s fire. Your conformity to Christ through your heart and action has secured Heaven’s validation. The deed is being released in conjunction with your passing the test! And thereby you secured the right of possession to your promise. PAID IN FULL!

Wild Confirmations
If you’re like me, you’re probably still recovering from a season of testing yourself. Which is why I’m grateful God felt to go overboard in making His point. Here’s a few wild confirmations. While in Florida we visited my Dad and his beautiful wife to celebrate his 77th birthday. Double portion covenant and completion. Amazingly they just purchased a new house!

Saturday night’s service—where the Lord spoke to me about the “seed becoming the title deed to your promise”—was held in the auditorium of a REAL ESTATE complex of all places. Our friends Brian and Bren Gibbs hold church there in Sarasota every Saturday night. You absolutely cannot make this stuff up.

So with signs accompanying, I want to prophesy to many of you that you are inheriting the covenant promise made to you and even passed down from your forefathers. You have passed the test. The seed has become your deed. PAID IN FULL!

The Mount of Blessing is a Sign
Mount Gerazim or the Mount of Blessing has become a living witness to how the Lord is fulfilling His promise to His covenant people. Vineyards are growing there for the first time in centuries. The promises from Jeremiah, Amos and other biblical prophets are being fulfilled before our eyes!

Our friend Tommy Waller leads a ministry on this mountain, bringing in Christians from across the world to harvest the grapes for area Jewish wineries. This is done freely, as a service to them.

Jeremiah’s buried deed ultimately prophesies to Israel. The seed has become the title deed, granting them the right of possession. I believe God is calling us all to align ourselves with the Lord by contending for the fulfillment of this promise. Let’s close with the prophetic word given to Jeremiah as he buried the deed. Get ready to receive tonight!

For thus says the Lord of hosts, the God of Israel, “Houses and fields and vineyards will again be bought in this land… Behold, I will gather them out of all the lands to which I have driven them in My anger, in My wrath and in great indignation; and I will bring them back to this place and make them dwell in safety. They shall be My people, and I will be their God; and I will give them one heart and one way, that they may fear Me always, for their own good and for the good of their children after them.

For thus says the Lord, ‘Just as I brought all this great disaster on this people, so I am going to bring on them all the good that I am promising them. Fields will be bought in this land of which you say, “It is a desolation, without man or beast; it is given into the hand of the Chaldeans.”  Men will buy fields for money, sign and seal deeds, and call in witnesses in the land of Benjamin, in the environs of Jerusalem, in the cities of Judah, in the cities of the hill country, in the cities of the lowland and in the cities of the Negev; for I will restore their fortunes,’ declares the Lord” (Jer. 32:15, 37-44). 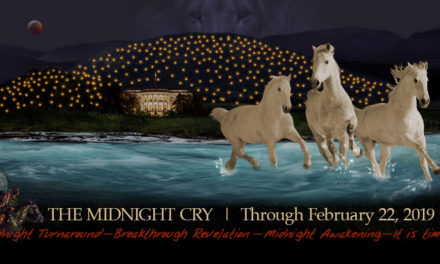 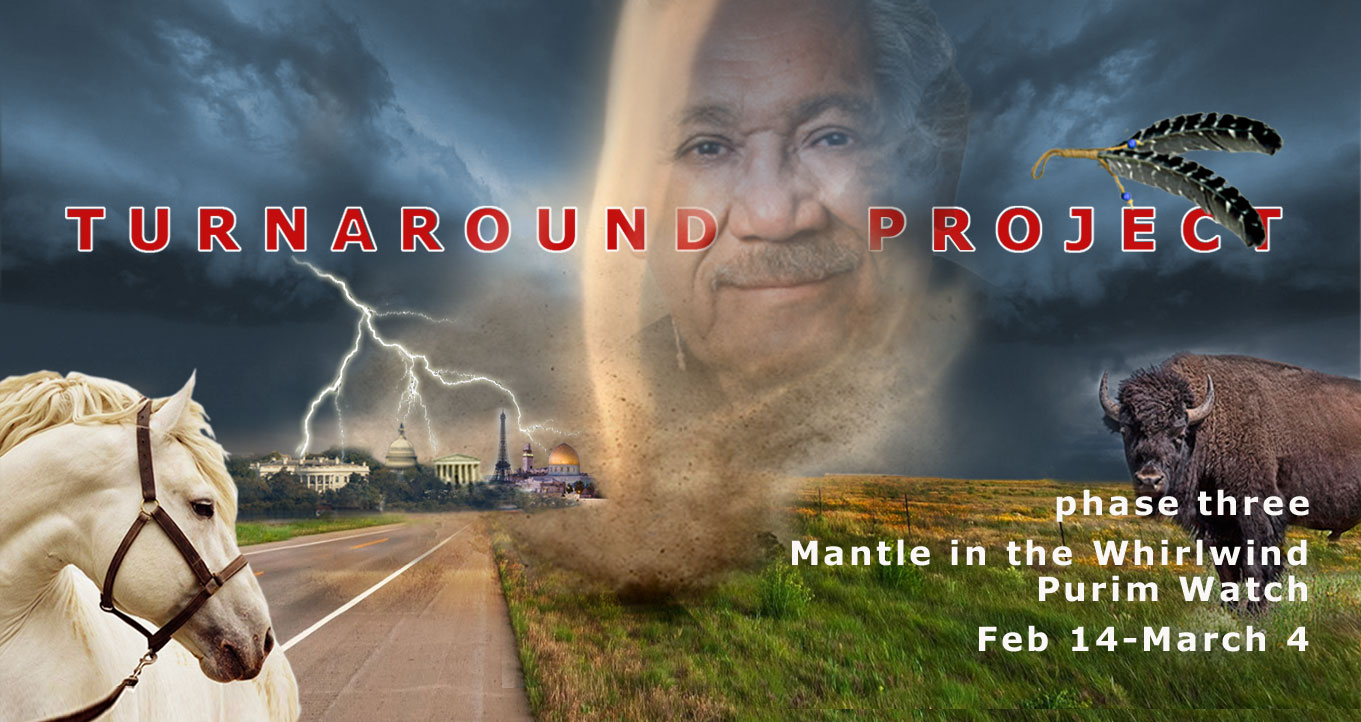 Jay Swallow—Prophet in the Whirlwind