Turnaround Secured! Plus—I Lost My Wallet in Israel And… 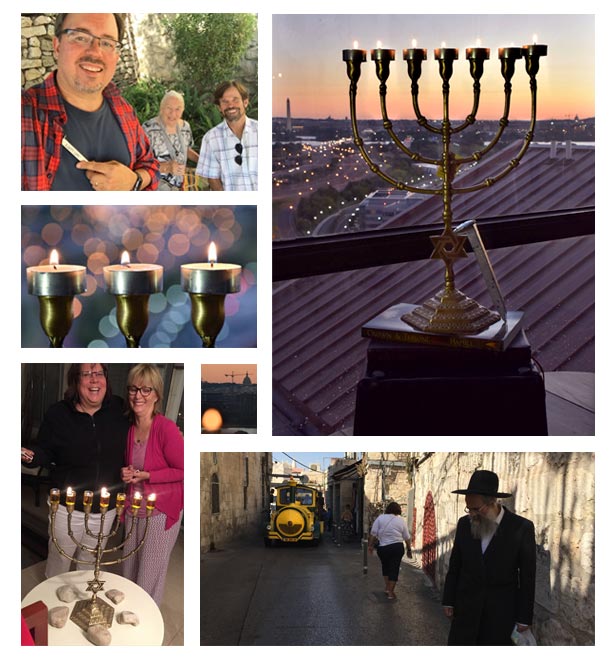 Burning lamp, Israel and America! Above left: Jon with John and Una near City of David. Above right, center: lamp lit for the first time in DC at dawn this morning. Below left, Jolene with Linda Wyatt lighting lamp Weds. evening. Below right, a “train” makes its way through the Old City towards the Temple Mount. Glory!

We are just back from Jerusalem. What an honor to launch the Global Prayer Storm from Zion last Wednesday evening, with a prayer call joined by James Goll! Like the Maccabees of old, we lit our new menorah to consecrate the next phase of this ‘global Moravian lampstand’ to the Lord Jesus Christ. As well as the next phase of Lamplighter and the Glory Train.

It was an unforgettable moment. For all of you who joined the call, THANK YOU!

Turnaround! Dream from Jerusalem
Today I want to share a dream with you. The dream came early in the morning, a day before our consecration call. We were staying at a home in Jerusalem directly overlooking Mount Zion. But in the dream I was transported back to the United States.

And I found myself hovering over many of the places where we had just ministered on the Glory Train. I saw new patterns forming in these areas at a foundational level. These patterns were like a slow-moving reversal of a swirling storm. They were more intense in the center but affected the entire regions of the cities that I saw.

The dream itself was the most authentic I had during our time in Israel. Very distinctive in its purity. And I feel it is God’s way of saying “Mission accomplished!”

It’s important to emphasize that Zion is the only land God decrees from His word to be directly “married to the Lord.” (Isaiah 62). The precedent of Isaiah 62 certainly gives hope to every city in the nation, and to every nation in the earth. Because this covenant alignment is also available to us! But first and foremost this transformational passage and the covenant it conveys is for Jerusalem, Israel.

And therefore every nation who hopes for this same covenantal transformation must be rightly aligned with the dream of God’s heart for this city and nation!

Vision of Three Fighter Jets
Which brings us back to the Glory Train. After circling the nation, we then moved across the nation from Sacramento to Colorado Springs, Kansas City, all the way to Syracuse. This was very purposeful. We felt God wanted to bring a governmental demarcation of the fulfillment of a vision I received back in 2000. Three fighter jets converging for breakthrough in Israel. I saw these fighter jets taking off from Colorado Springs, Kansas City, and the mid-Atlantic region of the nation respectively.

These three jets represented three distinct prayer movements—governmental intercession, 24-7 “harp and bowl” worship and prayer, and what we’ve come to know as the “crown and throne” movement. They converged over upstate New York and New England and shot across to Israel to fight for her blessing.

In retrospect, it was only right to continue this path with a journey to Israel after Colorado Springs, Kansas City, and Syracuse. Why we didn’t comprehend this until it was almost too late is beyond me. We are very grateful for the Lord’s intervening awakening!

Fireworks from Zion—Twice!
And when we shared on the Glory Train in Jerusalem, the Lord confirmed his word with an extraordinary sign. Remember Bob Jones’ word about the Glory Train. “That glory train will get bigger and bigger because when it stops in the city, that city will no longer belong to the enemy. It will belong to the Father! Get ready for entire cities to be saved. And get ready for THE GLORY TO SHINE AT NIGHT like streaks of flames; LIKE FIREWORKS to where you’ll visibly begin to see His glory.”

Jerusalem last Monday night happened to be hosting the Maccabim night marathon through the city. The Maccabees, of course, were the original “lamplighters” who reconsecrated the temple by relighting the flame on the menorah. Preparing of the glory!

Ministering on the night of the Maccabim race was itself quite a sign. But when fireworks erupted from the City of David, first during worship and then while I was explaining about the significance of fireworks from Bob’s word, I about fell out. Double portion fireworks as we were crying out for God’s glory to be restored to Zion! You just cannot make this stuff up.

This was actually the second time fireworks erupted during a Glory Train ministry session. The first time was in Brunswick, GA with Jamie and Redonnia Jackson. From “Burning Wick” Georgia to quite literally the City of David on Zion in Jerusalem. I hope you don’t mind me repeating myself. Because quite literally, you cannot make this stuff up!

My Wallet Went Missing in Israel
Especially with the fireworks by the City of David, I knew I had to go there before we left. As will be explained in the next few days, I came with a tent peg in hand to stake the land. On this beautiful clear Friday morning I walked from the Zion Gate down to the City of David. Breakfast was on my heart. The exhibitions had not yet opened, but I was relieved to find a snack bar already serving customers. One granola bar and mint lemonade later I was a happy guy.

Until I got to the cashier, that is. That’s when I discovered my wallet was suddenly missing!

I immediately recalled how some guy had bumped me on the way down to the City of David. Maybe the guy stole my wallet, maybe it accidentally got bumped out. I don’t know. All I know is that my wallet, containing my identity and financial capacity, mysteriously went missing.

I still felt I needed to keep on with the assignment. It was a privilege to meet John and Una Gere to pray at the City of David. We found a special place in the general area to VAV a tent peg. In the very city where the Ark of the Covenant rested. Where the Tabernacle of David was originally raised up. After just prophesying about Amos 9:11 and the restoration of the Tabernacle of David etc.

Again, what a privilege!

Recovering My Identity on the Temple Mount
It was a life-changing time with God. I then returned to Jolene and mustered up the courage to tell her my wallet had suddenly gone missing. We frantically looked around the house, hoping I had accidentally left it there. She then accompanied me to the area, calling our credit card companies as I retraced my steps from the Zion Gate to the City of David and back.

No wallet. I figured it couldn’t hurt to stop by the Western Wall and see if anyone had turned it in. Definitely a long shot. I went through security, and an IDF guy directed me to a police station on the other side of the courtyard.

In retrospect, it seemed that when I walked into the station, the police officer behind the desk had looked at me with surprise. I asked her if there was a ‘lost and found station’ somewhere, and if anyone had turned in a wallet.

She looked at me with even more surprise. I resisted delving into a long explanation about how it’s our longstanding policy for Jolene to serve as the official money keeper of our family. She simply has grace for it. And the wisdom of this decision proved especially true that Wednesday. No cash was lost.

The radio buzzed with rapid Hebrew. The officer clicked off and stared at me again, surprised.

“Did anybody say they had found it?” I asked.

She picked up an envelope and handed it to me. “It’s right here! You just have to sign for it.”

I about fell out.

A police officer near the Western Wall—quite literally a watchman on the wall—had found my wallet nearby and brought it to the station. Did I mention that I had been praying for the Lord to set us as watchmen on the wall? And as if by response, it was actually at the Kotel, the Western Wall, where my stolen identity was somehow recovered.

Talk about a turnaround! Serious. I truly believe God’s turnaround verdict has not only been decreed from Heaven’s Court, but VAVed into the earth. Even into the Kotel, the Western Wall of the Temple Mount, where an unceasing vigil is kept by both Jew and gentile 24-7. At the wall where we, and many of you, have placed these very petitions. Including the Divorcement from Baal, the Declaration of Covenant, and the 7-22 Turnaround Verdict.

The Turnaround has been secured. Inclusive of this decree, for both Israel and America, is the recovery of our identity. From the Temple Mount. Thanks to His watchmen on the wall.

You cannot make this stuff up. B’shem Yeshua. NO KING BUT JESUS!

“I will cause a turnaround for the land from its captivity so that it will be as was at first,” says the Lord (Jer. 33-11).

Shields Up as Days of Awe Begin