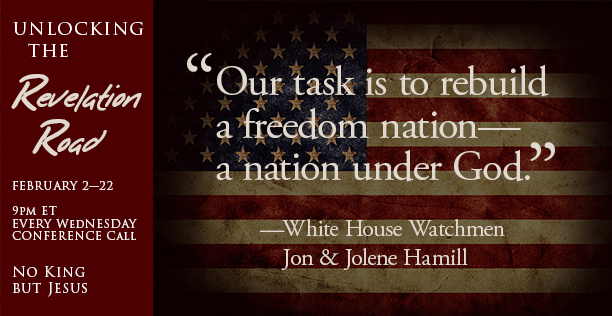 DEAR DESTINY CONTENDERS,
THE TITLE BELONGS TO WHOM? Today our nation and world will be held captive to our televisions as the strongest football teams in America, Tampa Bay Buccaneers or the Kansas City Chiefs clash and collide their way down the field in pursuit of glory. Only one will emerge with the mastery attained and title gained. Victor, Super Bowl 55.

This title is ephemeral, of course. In just a year it will vanish as another team ascends.

BUT A MUCH MORE VIOLENT CONFLICT is playing out now over the nation of America itself. And from this “conflict of crowns” the victors could carry the title even into eternity. At the core is the identity of our nation itself. As we wrote in White House Watchmen, our task is to rebuild a freedom nation—a nation under God. The question that should haunt every American is this. Will we become an American Babylon or remain a covenant nation under God?

It’s not hyperbole. In fact if I’m guilty of anything it’s understating the scope of the challenge. Remember that Babylon is symbolically portrayed in the Book of Revelation as the governmental seat of global governance sourced in blatant idolatry and bondage, effectively eradicating freedom. That said, last week—on the very day that we started our Revelation Road project—Jeff Bezos and Amazon unveiled a plan to REBUILD THE TOWER OF BABEL IN WASHINGTON DC.

Well, Pentagon City actually. Literally, right across from the Pentagon, just across the river from the White House and the US Capitol. Absolutely part of Washington DC.

The dark symbology of the out-of-place ziggurat, planned centerpiece of Amazon’s emerging HQ2, would serve as a perverse crown claiming Washington DC according to the identity already being forced upon it from a variety of sources. Just as with the original Tower of Babel, it speaks of unveiled, unmitigated defiance of the government of God. It would symbolically crown our nation as American Babylon.

Did I mention the plan was unveiled on the two-week anniversary of Joe Biden’s inauguration? What a wild two weeks it has been! President Trump’s restraint on government-funded abortion was immediately rescinded. American taxpayers are once again funding abortions not only in America but the world. In the midst of a fragile economy teetering due to covid-19, the permit for the Keystone XL pipeline was cancelled, causing 10,000 high paying energy jobs to immediately vanish and affecting at least a million additional jobs. By executive decree our national borders became porous again.

And the Heaven-mandated boundaries protecting children in their innocence were horrifically violated. American parents once again face the prospect of having their children forced to make decisions on gender, and even their own sexuality, as early as kindergarten.

Then there’s the “new approach” to foreign policy. It is primarily a reset of the globalist agenda propagated by former president Obama, with most of the major players re-seated. Completing the task of finally dividing Israel is now a priority. Meanwhile the Iran nuclear deal is being pursued again, which would empower Iran to further destabilize both Israel and Sunni nations in the mideast.

Did I mention a return to a policy of appeasement with China?

Meanwhile Donald Trump’s impeachment trial is set to begin Monday. Remember that just a few short moments ago President Trump was empowered by the Lord to restore our economy, ushering in the lowest unemployment among blacks and hispanics on record. He worked to restore the covenant boundaries of our nation, honor the sovereignty of Israel, establish the Space Force as the military’s newest branch. He worked tirelessly to empower religious freedom once again in America, as well as internationally. Above all he honored the covenantal foundations of our nation purposefully marginalized by  his opponents.

And when the false crown of the Coronavirus hit, Operation Warp Speed kicked in. President Trump shattered all previous records in stewarding the discovery and release of vaccinations effective in combatting the virus.

But vindication is coming from the Lord.

All that said, I want to suggest to you that the party now in power has taken actions to bring us further down the spiral of the proverbial ziggurat. American Babylon. This coercive identity is not being chosen by the American people, it is being forced upon our citizens with powerful machinations hauntingly similar to the Nazi takeover of Germany.

And like the Jews of old, we now stand between Babylon and a Covenant Nation. The good news is that, like the Jews of old, the title deed to this covenant land remains in our hands. But you can no longer ignore the facts. The day of decision is now at hand. And you must take the initiative to win this conflict and secure our covenantal inheritance.

14 Stand therefore, having girded your waist with truth, having put on the breastplate of righteousness, 15 and having shod your feet with the preparation of the gospel of peace; 16 above all, taking the shield of faith with which you will be able to quench all the fiery darts of the wicked one. 17 And take the helmet of salvation, and the sword of the Spirit, which is the word of God; 18 praying always with all prayer and supplication in the Spirit, being watchful to this end with all perseverance and supplication for all the saints… (Ephesians 6:10-18).