Storm Wars—Time to Turn the Tables! With Chuck Pierce Word 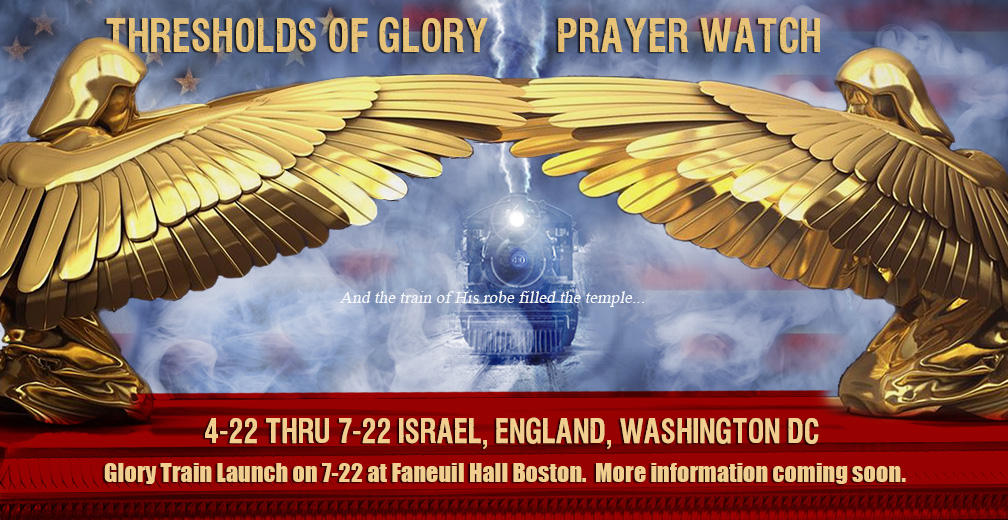 FANEUIL HALL JULY 22! We are returning to Faneuil Hall Boston to launch the Glory Train movement through 2020. Big news ahead. Save the date!

GLORY TRAIN OFFERING! Sowing into Israel & England Tour as well as the Glory Train launch. We are believing God for $22,000 between 4-22 and 7-22. Lets stand together to receive His miracle provision—now and for months ahead! To contribute please CLICK HERE.

DEAR STORM BREAKERS,
TODAY THE WATCH CONTINUES—again with urgency. But I’ve got good news to share.

Before we jump headlong into the storm, lets back up just a moment. I shared our gratitude yesterday that a tithe of our $22,000 goal was actually donated in our Glory Train offering project the first day. Some of y’all might have misunderstood what I shared. It would have been great if the entire $22,000 had come in the first day! But a tithe of this amount, or $2200, is truly an amazing accomplishment.

A few of you made generous donations yesterday. We are thanking God for the remaining $19,000 to be expedited by His grace! With His commanded blessing poured out on each of you who give. In the divine exchange of giving, I truly believe this offering is sought by the Lord to seal the threshold covenant we made together Sunday as a family.

And it certainly fuels the fire of our engagement in the Lord’s incredible work this season. From Israel to England to Washington DC, as well as the Glory Train launch. We are giving our all in this season. Please be generous. Hear the voice of God’s Spirit and contribute as He leads today!

Storm Wars—A Time to Turn the Tables
Over the past few days we have shared on significant storm warnings received in “real-time.” Yesterday I gave a broader perspective on the storms, along with the commission I personally received from a “storm warning” dream to pray for President Trump. We are ramping up prayer right now due to the urgency we sense by the Spirit. I’m sure many of you are too.

Today in prayer the Lord gave a few revelatory keys to catalyze the breakthrough and turnaround He intends in this season. I have good news for you. IT IS TIME TO TURN THE TABLES…

Here’s what the Lord showed me this morning. While praying into the storm warnings, I saw for the first time a clear differentiation between Lynnie’s dream and Jolene’s vision. In Lynnie Harlow’s vision of the storm, she saw dark clouds which looked like a snake. They moved in a snake-like fashion over Washington DC. It was clearly the enemy’s work. Remember the Hebrew symbol for nine “Tet” can be interpreted as both a snake and a womb. Hear the warning In Revelation 12 a serpent is pictured as poised to devour God’s bride and her offspring. They are rescued by a great eagle. This is coming to pass.

In Jolene’s dream, the storm she saw was fearful. It was global. But it was God’s storm. Jolene has insisted on this from the very beginning. Remember how the Lord spoke to us Isaiah 19 for 2019. Because Isaiah 19 conveys such a storm. “Behold, the Lord is riding on a SWIFT CLOUD and is about to come to Egypt; the idols of Egypt will tremble at His presence…” (Isaiah 19:1).

The Passover imagery in both Isaiah’s prophecy and Jolene’s dream is very clear. God is coming to Egypt! The gods of Egypt, and the idolatry which invokes these ancient deities, simply topple. Thrones tied to the idolatry of Egypt are exposed and toppled. Rick Ridings prophesied about this back in 2012. And in Jolene’s dream, a breakthrough angel called “Global” was sent to help walk us all through.

I believe the snake-like cloud Lynnie saw over Washington DC represents the enemy’s storm. It was a movement. And in reality it has been here for a long time!

But hear me now in this. In response to concerted prayer, the Lord has begun to uncloak and expose the storm. A dark movement which has clearly already been at work to upend His own work.

I believe the fearsome storm Jolene saw is actually the storm of the Lord. It is being sent not only to counter the enemy’s storm, but to expose and take out the enemy’s storm. And to take over the spiritual atmosphere of Washington DC. You do know what happens when two fronts collide, don’t you? A storm.

Lets return to the dream I shared yesterday about President Trump which conveyed a pivot point in history. In the 2016 dream, Trump was leading baseball practice when dark storm clouds rolled in. Hello! That has proven pretty accurate. The Mueller investigation, the vitriolic media propaganda perpetuating what has now been proven to be absolute falsehoods, even the “storm” of Stormy Daniels, all bear witness to this.

But God’s storm is confronting and exposing the enemy’s storm! In my dream two white horses appeared from the dark clouds. At least in my prophetic language with the Lord, white horses have always represented Heaven’s movement for turnaround. The horses are sent to enforce God’s verdict, with Jesus taking the lead. From Revelation 19:11. “And I saw heaven opened, and behold, a white horse, and He who sat on it is called Faithful and True, and in righteousness He judges and wages war.”

I had this dream in May 2016 during the Trump campaign. Overall the administration’s accomplishments have absolutely reflected this ever since. Look at our economic recovery. Look at our policy toward Israel. Look at the appointments of Supreme Court justices, as well as countless federal judges in a literal reformation of our judicial system. Look at the dramatic governmental shifts regarding abortion policy. And the list goes on.

Turnaround. Literally against all odds. And absolutely not without many challenges as well.

But that said, lately it has seemed the momentum of this turnaround has stalled a bit. What’s been unnerving is that it seems to have been stalled across the spectrum of government. Many have reported what we ourselves have perceived. Almost a sense of foreboding.

Let me prophesy to you. God is in process of revealing the true extent of the demonic storm which has encompassed Washington DC. It has actually existed for quite a while here. The uncloaking of this storm of deception, corruption, dark agendas tied to the occult is now at hand.

It’s a powerful storm. But beloved, here’s some good news. The storm winds from another realm are now blowing… As of Passover, I believe the storm of God’s glory has been welcomed across our thresholds. Hear me in this. This storm of the Lord will indeed thresh! And in its midst, the horses of God’s turnaround are being released.

From Chuck Pierce at Revolution 2018:
“Revolution is an interesting word. Because it can mean overthrow… revolution can have another meaning also. It can mean a whirlwind that creates a new cycle!

Revolution says to us there are lots of incredible whirlwinds on the way. And remember Job heard the Lord in the whirlwind. So we’re going to have to listen for the Lord in ways we have never listened for Him before.

I’m sending you back and I’m sending you forward. I’m doing both at the same time. That’s part of the whirlwind. Creating cycle of moving from the past quickly from areas you were almost worn down and got lost in your faith in, into an explosion of new faith and new vision.

How many feel a whirlwind swirling? You feel a whirlwind going on. But I’m here to prophesy when you. See that whirlwind come across Pennsylvania this year, into Maryland and into DC. Your going to know that God has said I have come to secure My pathway for the future.

Jolene—Shaking the Vineyard of America

American Pharaoh and Global Governance—Prophetic Warning One Year Ago