Patriot Act—Deadline Looms
Key aspects of the Patriot Act are set to expire Monday, and the US Senate is reconvening for a rare Sunday session that promises raucous debate on preserving American liberty in the face of government surveillance deemed necessary to counter terrorism.

And friends, we need to pray.

President Obama supports a bill backed by the House that ends the NSA’s bulk collection of phone records, but retains their right to search records held by phone companies on a “case by case basis.” According to Fox News, the USA Freedom Act “was supported by President Obama and the nation’s top law enforcement and intelligence officials.”

But the bill went nowhere in the Senate, and Sen. Mitch McConnell’s pitch to extend the surveillance provisions for a few extra months to give some breathing room has failed as well. With no agreement, the Patriot Act’s provision for NSA surveillance is set to expire on Monday.

Interestingly, two Kentucky senators are leading each side of the debate. Presidential contender Rand Paul seeks to stop warrantless surveillance against American citizens, while Majority leader Mitch McConnell is pushing Senate colleagues to approve a revised Patriot Act, which he deems still necessary for the protection of our homeland while affording greater protection for civil liberties.

Biblical Perspective
When David stood up to number Israel, the Lord identified this most basic form of government surveillance as being pushed by Satan himself (1 Chronicles 21:1-4). Further, the Book of Revelation clearly warns of a coming time when citizens of the world will be forced to receive “the mark of the beast” even to buy and sell.

“And he causes all, the small and the great, and the rich and the poor, and the free men and the slaves, to be given a mark on their right hand or on their forehead, and he provides that no one will be able to buy or to sell, except the one who has the mark, either the name of the beast or the number of his name” (Rev. 13:16-17).

Take a moment to ponder this. Some 2,000 years ago the Apostle John, Jesus’ best friend on earth, is propelled into a revelatory vision while in forced exile on a remote island off the coast of Turkey.  He sees a future dictatorial government, tied to Satan, subjugating the earth by employing tracking devices that allow his government to record and evaluate every transaction each individual makes.

In case you’re wondering if the Bible is accurate through the ages… only in our generation has this technology even begun to become available! And yet the Book of Revelation clearly prophesies that a modern-day Pharaoh will merge technological capacities with government surveillance to bring the world into subjugation to himself.

Because if America is to remain a beacon of freedom as the end-times progresses, then retaining the freedom of individuals and right to privacy afforded by the Constitution is perhaps the core issue of the hour. Especially in light of current technological advancements.

Revise—Plan Ahead
From my limited understanding, President Obama and intelligence leaders have come out on the right side of this debate. Revising provisions of the Patriot Act, such as limiting access of phone records to a “case by case basis,” seems wise. Relying on private phone companies for data storage also seems wise.

Preventing government surveillance from impinging on our right to privacy is an absolutely relevant issue. And nothing can more effectively persuade Americans to compromise this right than a crisis in homeland security.

Critics will point out that the same President who seeks to limit government surveillance has by his policies—especially on open borders and illegal immigration—exacerbated the need. But it was actually President Bush who instituted the Patriot Act, affording the NSA extraordinary powers of surveillance over “we the people” following the terrorist strikes of 9-11.

Prophetically, my strongest admonition is that we institute now checks and balances to ensure our Constitutional freedoms remain protected and perpetuated through the inevitable terrorist strikes of the future. Because that is when Americans will be most vulnerable to yield our freedoms again. And if we yield our remaining freedoms, there will remain little that separates us from dictatorships.

Freedom to Worship is Threatened!
As a final thought, let me suggest our greatest threat imposed by government surveillance is not our right to privacy. It is actually our freedom to worship, apart from the imposition of government! That is the core issue identified by the Apostle John as motivating the Pharaoh-like dictator known as “the beast” to employ the full potential of government surveillance against his citizens.

Further, freedom to worship is this core issue our forefathers, Pilgrims and Patriots, gave their lives to secure for all Americans. And it is at least as threatened now as our right to privacy. America’s greatness is not secured by our capacity to protect and defend freedom alone, but by God’s grace secured by their covenantal dedication and perpetuated in our watch.

Lose freedom to worship, and we lose American liberty.

Special Call Sunday! God’s Turnaround is Now in the Atmosphere of DC 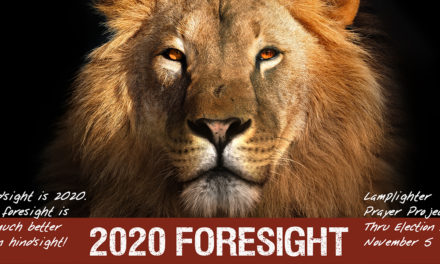 Hindsight is 2020—But 2020 Foresight is Better! Call Tonight