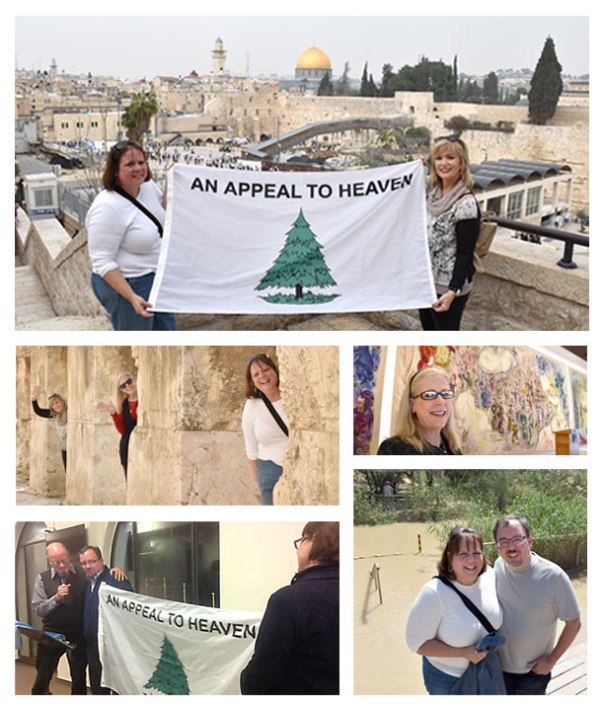 Top: Jolene and Linda Wyatt with Appeal to Heaven flag by Wailing Wall, Temple Mount. Middle left: Jolene, Kathy Magnusson, and Linda Wyatt in first century shops by Temple Mount. Jolene called hers “Chico’s.” Middle right: Kathy Magnusson in front of Chagall painting of Israel’s history at the Knesset. Below left: Rick and Patti Ridings pray and commission us for the Glory Procession. The Lamplighter family presented a special offering and the Appeal to Heaven flag. Below right: Jon & Jolene at Jordan River.

This Thursday evening Rick and Patti Ridings led in focused intercession for the Israeli elections. Rick shared an extraordinary prophetic word that gave so much clarity on what the stakes truly are. By the Spirit he saw PM Netanyahu and Jordan’s King Abdullah as pillars of God’s work to thwart the work of both ISIS and the Iranian nuclear threat.

Right now the polls are indicating a strong shift to the left, away from PM Netanyahu’s Likud Party. Please engage in focused intercession.Pray for the people of Israel to receive clarity from the Lord apart from all unrighteous agendas. Pray especially Daniel 7:22 and Psalm 125:3. Covenant blessings to each of you.

Next Tuesday, March 17, the citizens of Israel will be voting for a new government. This is a critical time for Israel’s leadership and near future to be determined. We need to pray, and cover the nation of Israel in this time, and ask for God’s will to be established on the earth. Here are a few points to be praying for over the next week:

1. We want to be praying for a further establishment of righteousness, truth, humility, and justice in Government. According to Psalm 45, we see how good government brings joy and peace. We see what bad governments can do all around the earth, and the destruction and evil they bring.

On Feb. 11, 2008, a group of about 10 of us, were praying in the weekly government prayer watch at Succat Hallel. During that time, we felt God spoke to us, and said “I want you to proclaim an earthquake into the foundations of the government of Israel, for the uprooting of the corruption in government, and that Prime Minister Ehud Olmert will be removed, for he has been found corrupt in My eyes.

We obviously pray this kind of prayer in humility, and only if we discern it is from God. God is far ahead of our plans or thoughts. He does not react to the enemy, but the enemy reacts to God. We join ourselves to the Lord to be the head, not the tail, with God from his throne room in heaven to pray over governments. And so we proclaimed what the Lord spoke. About 20 minutes later, there was a 5.0 earthquake in Jerusalem. We kept praying this over the next months, and after several scandals, Olmert finally resigned (a few months ago, he was found guilty).

2. Last Tuesday, I had a vision that was the furthering of an earlier vision I had last October (you can read it here). I saw in this vision a Dove that would fly back and forth from Jerusalem to Amman, Jordan, in a figure-eight pattern, back and forth. I saw two pillars in each city, which had to do with protection over the countries concerning what God is doing in those nations right now. I saw the face of Netanyahu on the pillar in Jerusalem, and of King Abdullah on the pillar in Jordan. Then I heard demons saying “We have to overthrow Netanyahu/Abdullah, so that the dragon can do what he wants to do in this region.” Then the Lord reminded me of what he spoke to me years ago – “Keep stirring the pot of worship.” And out of the pot of worship came smoke, which went to the dragon’s cell and the underground cells where the demons were, confusing them, cutting off their communication, and causing them to fight each other.

3. The Mandate needed to align with the Scriptures and walk in Israel’s God-given identity. Israel should not apologize for being here. God said he would bring His people back, there are over 700 scriptures that speak of it. Israel should apologize, and rightly so, for things done wrongly. But it should not apologize for receiving the Inheritance promised to it, and for what God has done. The scriptures tell us that He is the one that would one day bring them back – they did not bring themselves back. (Pray Isaiah 61:7)

4. The coalition needed to continue the “clean sweep” of the MOI and open the doors needed for Aliyah. The ministry of Interior is the office over Aliyah (Jewish immigrants), and is responsible for granting citizenship/residency/visa requests for people. For a few years, the Jewish Religious were over the ministry, and caused much trouble to many believers and foreigners in the requests and processes, denying citizenship or visas to people who wanted to either make Aliyah or felt called to be here. We felt they were closing doors to people called here. The Ministry of Interior is like the gatekeeper for the nation. Last elections, we felt led to pray that the Orthodox Religious party would not be in the coalition and regain control of the MOI, to bring freedom into the Ministry of Interior, which happened. We want to pray for that to continue in these upcoming elections.

The mandate needed to be freed from the yoke of the nations. God wants Israel to depend on God alone, not on the powers of the earth. We need to pray Israel will not go against God’s words because of political or economical pressure from the nations.(Pray Jeremiah 30:8). The Nations need to come into a realignment, into a covenant and standing behind Israel.

Live from the Rebound City! New Move of God Announced, Initiated, and Confirmed