Revolution! It’s exciting to see the Lord establish this movement His way, by His Spirit. Yesterday we chronicled Chuck Pierce’s prophetic message on revolution for New Jersey. God is coming in by way of the gate facing east! Remember this. Awakening is Revolution!

Today we are excited to share with you a recent visitation given to our friend Sheryl Price. She and her husband John have raised up an incredible team in New Jersey to help steward the mandates God entrusts to the state and region.

Best of all, they move in Heaven’s authority without being religious. Take last week, for example. Immediately following Chuck’s legacy-making word on Revolution, John was tasked with closing the meeting. Definitely a hard act to follow! The whole room was buzzing with life and energy. Was he going to pray? Prophesy?

John approached the microphone, tapped into this momentum, and with a commanding smile directed us all into our future.

OK. Now that’s revolutionary! John & Sheryl make quite a team, and I’m looking forward to introducing them to our Lamplighter family tonight. You don’t want to miss! Below is Sheryl’s posting.

Sheryl Price
Several nights ago I had a visitation from the Lord which has deeply stirred me. My heart has been ignited with a new fire and passion for spiritual revolution! We are moving into the new season God has spoken to us about here in NJ. A MOVEMENT has begun! We are being called to wield the handle on God’s harvest.

Chuck Pierce prophesied that REVOLUTION will break out in New Jersey and affect a nation. And like Gideon’s 300, we are aligning to tear down illegal altars and fight for what the Word of God says is ours!

Visitation—Overcoming the Enemy’s Boundaries
As I awoke in the early morning hours the Lord was standing in my room. I watched as He reached up into the heavenly realm and pulled down what looked like an old boundary stone, which was swirling like a whirlwind and had the sound of a violent storm. Its height was about knee high, and I got up out of bed to kick it over. However, my foot went right through it!

The Lord spoke to me and said, “This is a pillar of resistance. It represents a spirit of resistance that has been opposing the forward momentum of my people in your territory. It seeks to keep you within old boundaries, so you will not move into the new that I have for you. It must be uprooted.”

I began to look for scriptures that would give me understanding on this. Gideon of course had to tear down his father’s idolatrous pillar before he moved with God to save the nation. I also found that in Zechariah 3, the enemy was present to resist (accuse, attack, be an adversary, resist) Joshua the High Priest just as God and His angelic hosts were visiting him to re-clothe him for his new assignment. You see he was wearing the filthy garments from his past season which was captivity!

“And he shewed me Joshua the high priest standing before the angel of the LORD, and Satan standing at his right hand to resist him. And the LORD said unto Satan, the LORD rebuke thee, O Satan; even the LORD that hath chosen Jerusalem rebuke thee: is not this a brand plucked out of the fire?

Now Joshua was clothed with filthy garments, and stood before the angel. And he answered and spake unto those that stood before him, saying, Take away the filthy garments from him. And unto him he said, Behold, I have caused thine iniquity to pass from thee, and I will clothe thee with change of raiment” (Zech. 3:1-4).

Joshua’s filthy garments were like the pillar of resistance that withstood Gideon nationally. They both needed to be removed!

New Garments, New Commission
God rebuked the enemy, setting a pattern for us to follow as we, too, sense the resisting power the enemy sets against us. God then re-clothed or mantled Joshua with new garments, setting him in order for his new assignment ahead.

His charge is below—with my notes on original Hebrew meaning in parentheses.

“And the angel of the LORD protested (testified, restored, encompassed) unto Joshua, saying, Thus saith the LORD of hosts; If thou wilt walk in my ways, (obey my word) and if thou wilt keep my charge, (keep the present day watch as a sentry, a guard) then thou shalt also judge my house, (rule, execute judicial decrees and judgment, strive as at law with God’s authority in His house) and shalt also keep my courts (surround with a heavenly stockade the territories which I give you, hamlets, strongholds and villages) and I will give thee places to walk among these that stand by (You will participate with the Angelic Host in my assignments and by my Spirit)” (Zech. 3:6).

New Boundary Stone! Boundaries Redefined
When the old garments of iniquity were removed, and Joshua accepted his new charge, God released a new boundary stone for the land. And this boundary stone overcomes the boundaries of the enemy that keep His people from advancing!

“Hear now, O Joshua the high priest, thou, and thy fellows that sit before thee: for they are men wondered at: for, behold, I will bring forth my servant the BRANCH. For behold the stone that I have laid before Joshua; upon one stone shall be seven eyes: behold, I will engrave the graving thereof, saith the LORD of hosts, and I will remove the iniquity of that land in one day. In that day, saith the LORD of hosts, shall ye call every man his neighbor under the vine and under the fig tree” (Zech. 3:8-10)

God is revealing to us the true boundary stone we have been given here in New Jersey. It is the stone with seven eyes! We have full access to every benefit of the sevenfold Spirit of God! Our new boundary extends as far as we are willing to go to decree God’s rule in the earth. Our vision is not limited!

No longer are we to be held captive by the iniquity of the past season and its resisting force of accusation. God can and will remove our iniquity and the iniquity of the land in a day! He has sent the Branch, His son, the Lord Jesus Christ, to cleanse us with His shed blood. We are those who are called to legislate Heaven, watching intently each day to bring Heaven onto earth to rule and reign during our lifetime. May we arise NOW to become the revolutionaries we have been prophesied to be, men wondered at, signs for all to see! 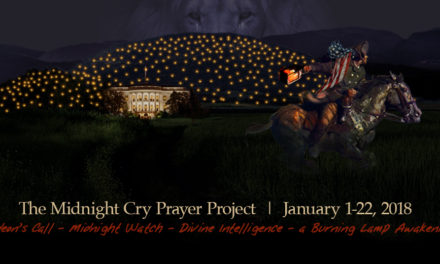