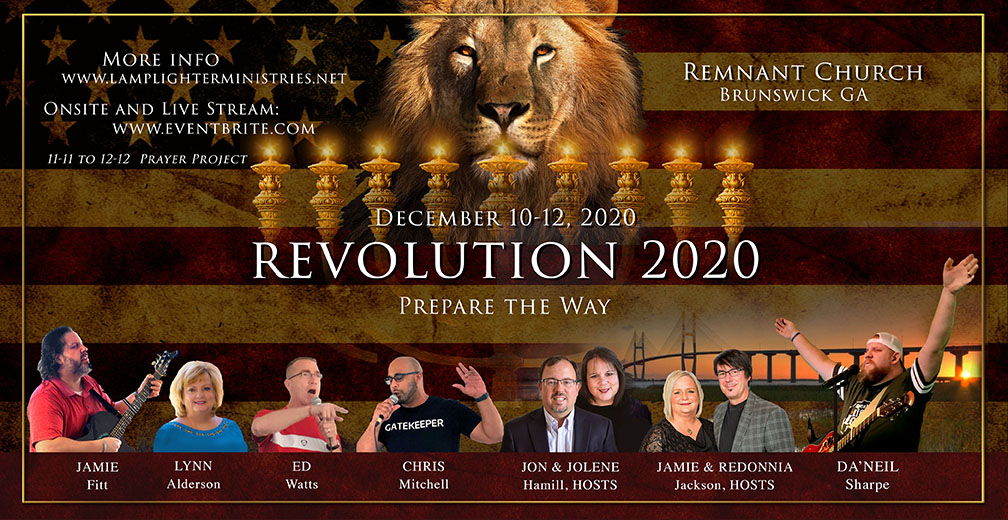 We have crossed over into the 400th year of America’s covenant with God. As we culminate 2020 the destiny of America will largely be determined by Georgia. Join us over Hanukkah to experience the Lord, gain fresh fire, and see His freedom movement catalyze a turnaround. It is time to PREPARE THE WAY!

TICKETS AVAILABLE NOW! 11-22 ON EVENTBRITE. Seating in the sanctuary will be limited to 150 people. We will also broadcast live-stream! Click link: https://www.eventbrite.com/e/revolution-2020prepare-the-way-tickets-129738875469

FB LIVE—SUNDAY EVE 9PM ET—LAUNCHING “BURN AND TURN” PRAYER PROJECT from 11-22 through 12-12! Covenant reset, national turnaround, freedom movement now at hand. Lets hold the line and see the shift God intends to preserve our nation—“that government of the people, by the people, and for the people shall not perish from the earth!”

DEAR FRIENDS,
WELCOME TO THE REVOLUTION. The battle for America’s destiny is raging. We feel strongly that God is going to bring a turnaround which perpetuates our covenantal legacy in Christ and upholds the constitutional integrity of our nation. Interestingly, Jolene and I were in Plymouth for the 400th anniversary of the Mayflower Compact when a fireball shot across the sky at exactly 7:22pm. Immediately I knew that the Lord was releasing His Daniel 7:22 judgement in favor of the saints—what we now call the Turnaround Verdict—for the nation.

Just a few hours after the meteor appeared, Ed Watts gave the following word on our FB Live broadcast:

This Hanukkah will be a KEY TIME in our nation, releasing a sound of Holy Revolution. This Hanukkah will be a KEY TIME (remember seeing a KEY – that Turns Time?) of a Revolutionary Sound and a Revolutionary Army that will cause things to begin to TURN in our Nation – And will Restore the Menorah of God in our Nation. There’s a Judah Maccabee sound coming forth – a Judah the Hammer sound that will strike the gates and shake the gates, dislodging the Enemy.

Please hear the language. God will bring a turnaround, even a turning or redeeming of time. A revolutionary sound will strike the gates and dislodge the enemy. And His menorah or lampstand for this nation will be restored!

Please keep in mind that Hanukkah commemorates the bold actions of a few spiritual revolutionaries called Maccabees who overcame vicious forces seeking to overtake Israel and shift their nation away from covenant with God. They even occupied the very Temple of God, defiling it and dedicating it to Baal. The Maccabees took back their desolate Sanctuary, restoring covenant with the Lord by relighting the Temple menorah and reconsecrating it to the Lord.

IN THE SAME MANNER, there is no more vital time to secure America’s covenantal destiny than right now. As we wrote in our book White House Watchmen, published this August, we will either keep the flame of covenant and freedom or succumb to deceptive agendas weaponized to destroy the very cornerstone of our constitutional freedom.

Midnight Train to… Georgia? Prophetic Confirmations
Revolution 2020 marks our 8th annual gathering. For the previous two years we were honored to host Revolution at the Trump International. But due to coronavirus restrictions no venue in DC or Northern VA was available. I had almost given up when Ed Watts gave his word.

Pastors Jamie and Redonnia Jackson had earlier suggested Remnant Church in Brunswick for the gathering. Then I received a call from Jamie Fitt. Astonishingly, the Lord had shown him that Georgia was to host Revolution 2020!

A Philly guy, devout in his devotion to the revolutionary city, talking Revolution in Georgia… that was all the confirmation needed.

And what the prophets have all been saying is absolutely true. The destiny of America now rests with Georgia. Back in 2014 I prophesied that Georgia is the Reconstitution State, which in a time of coming turmoil would even protect and defend the US Constitution in a way that affects the nation. Jamie Jackson prophesied in 2018 that as Georgia goes, so goes the nation.

And on Yom Kippur 2019 I saw a vision of a train rolling down to Jekyll Island GA. Brunswick GA is basically the gateway to Jekyll Island. As I continued to watch, the train made a sudden turnaround. It accelerated right back up to Washington DC! More on this in upcoming posts.

Secure the Seats
And the apostolic/prophetic theme for 2020 given to Lynn Alderson was simply “Secure the Seats.” This word could not have proven more true.

Because now two Senate seats in Georgia seem to be all that stand between a constitutional balance of power and a push from the radical left to dramatically shift us from our covenantal foundations. This includes packing the Supreme Court to empower abortion, even infanticide, as the law of the land. Empowering a radical marxist/socialist agenda that denies Americans rule by consent of the governed. Severely restricting the Constitutional right to freedom of religion. And pushing us out of our covenantal alignment with Israel, even as we face an existential threat from Iran.

Freedom Movement
Perhaps even more importantly, the Lord is resolute in releasing His freedom movement at this time. His glory is coming through the gates! We saw this with a year-long baptism revival at Remnant Church in Brunswick, as Holy Spirit encountered people dramatically in the water. We then encountered this reality during Revolution 2019 over New Years Eve, when God’s governmental glory swept in and brought us all to our knees.

That my friends is just the beginning.

So join us for a literal “suddenly” from God as we gather in Brunswick GA and across the nation via live-stream. It’s time for spiritual revolutionaries to arise. It’s time to join north and south in a new sound of breakthrough worship. It’s time for the glory of God to sweep us into revival.

And it’s time to see God’s governmental turnaround, secured by covenant restoration, come to pass before our very eyes.

Can’t make this up. It’s now time for this turnaround verdict to impact Georgia and our nation. Lets together see His glory. And lets prepare the way. NO KING BUT JESUS! 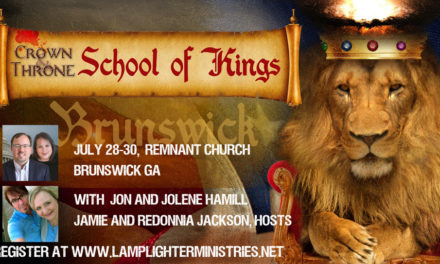 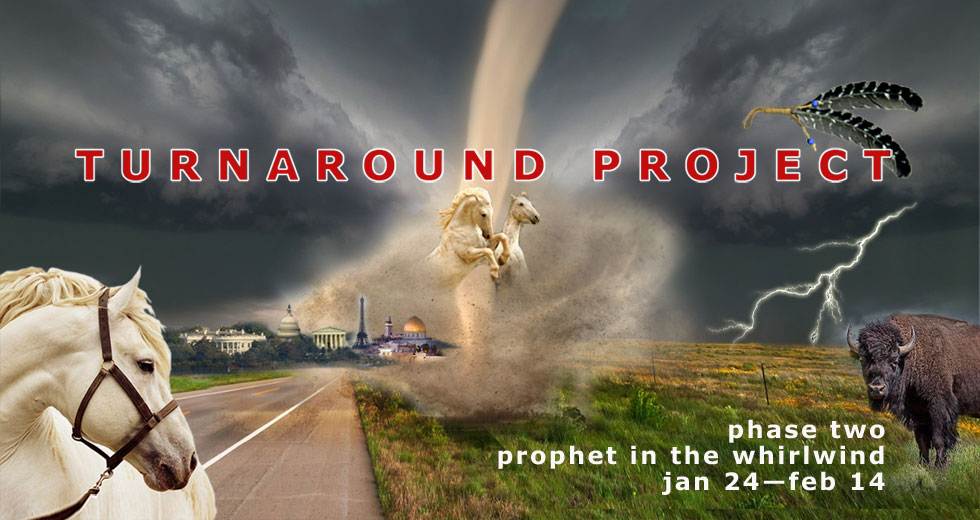 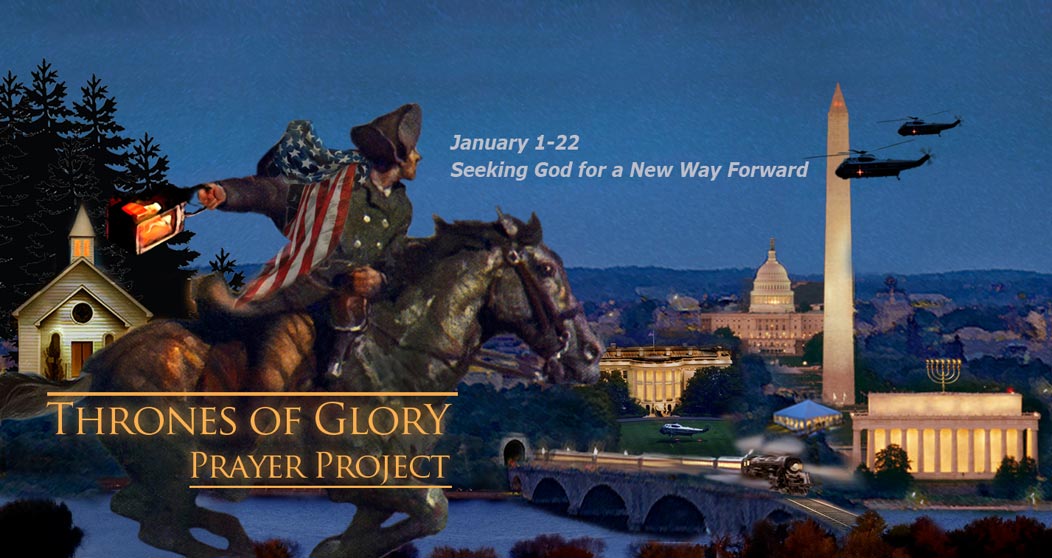 Conflict of Thrones 2017: Thrones of Glory and a Glory Revolution!