Dear friends, We just received word that medical treatments have now been suspended for pioneer apostolic leader Dr. Peter Wagner. It appears that the threshold of eternity is now compelling him forward once again—this time to fully taste the cry of his heart to which he has dedicated his life. On earth as it is in Heaven.

From the moment I was born again, I yearned to pray and I yearned to hear God’s voice. Peter Wagner’s books groundbreaking mentored me more than any other during those early years. Balanced, intelligent, yet innately spiritual, they answered many of the consuming questions of this young journalist.

You might remember Churches that Pray, Warfare Prayer, Breaking Strongholds in Your City, Prayer Shield, Apostles and Prophets, and others. In the early 1990s, these books revolutionized the prayer and missions movement on a national and global basis. A new vocabulary was developed. Prophetic intercession. Strategic level spiritual warfare. Spiritual mapping. Prayer shields for leaders. Deliverance. Generational strongholds. Identificational repentance. Societal transformation.

Meanwhile, Peter’s wife Doris Wagner developed critical modalities to bring people through comprehensive deliverance. And in process of the maturing of the prayer movement, the body of Christ was re-awakened to the legitimacy of genuine five-fold ministry for the first time in centuries. A new understanding especially of the apostolic and prophetic ministries began to take hold.

Most importantly for me, the Wagners’ books compelled me to go higher in my relationship with Christ, and to take responsibility the spheres to which I had been assigned. I remain deeply grateful for the comprehensive foundation the Lord used them to lay in my life. It directs me clearly to this day.

This past Thursday brought on a long drive through the Kentucky hills with ‘Mama Bunny’ Warlen. Bunny became a first-hand witness to the spiritual revolution ignited by Peter Wagner in the early days. Like the time Peter was called on the carpet by his peers during a missions convocation, compelled to provide a biblical defense for spiritual warfare. He agreed to this court of peers only if an accompanying room would be provided for intercessors to pray. Whereupon he promptly compelled prayer warriors from both evangelical and charismatic streams to pray together. In the Spirit and with understanding. Fervently!

It so happened that a huge hurricane was about to make landfall during one of these gatherings. Cindy Jacobs, one of Peter’s proteges, got caught up in a debate about whether or not rebuking a hurricane was biblical. So, inspired by Peter’s teaching on spiritual warfare, Mama Bunny took a covert team of intercessors out to the wharf and promptly rebuked the hurricane herself.

The hurricane then split in two, with both sides skirting the Pacific island and coming back together after passing it completely.

Can’t make that up. The historic meeting was thus preserved. Peter Wagner grew greatly in favor, as did Cindy Jacobs. And Mama Bunny to this day still exerts her extraordinary in Christ to make other leaders look really good!

There was great anticipation for this global movement of prayer and harvest as the 1990s came to a close. Colorado Springs became its epicenter when Peter and Doris Wagner moved there. Cindy Jacobs and Dutch Sheets came. Chuck Pierce made the jump, bringing extraordinary leadership to the Wagner’s Global Harvest Ministries. Prayer networks sprang up nationally and globally. Collaborative projects such as the 10-40 Window coupled targeted prayer strikes with strategic missional advances. Extraordinary conferences equipped the body of Christ in spiritual warfare and apostolic and prophetic ministries. Eventually, the Wagner Leadership Institute was developed to equip leaders across the globe in the pioneering truths God had restored.

But the dawn of the 21st century proved to be a little less favorable to the Wagners than the roaring ‘90s. At the height of our most intense spiritual conflicts, much of the body of Christ in America simply moved on from spiritual warfare.

I moved to Colorado Springs during this time, mostly for the privilege of working for Cindy and Mike Jacobs, but partly in hope of seeing this movement reach its full potential. Unfortunately, behind the scenes the long-envisioned global prayer hub in Colorado Springs became beset by many challenges. Criticism mounted about imbalances regarding claims of apostolic leadership and covering. The fall of a prominent leader, whom Peter had once identified as the apostle of the city, brought much of the movement to a screeching halt.

Yet the vision of Colorado Springs empowering intercession for global harvest was never put on hold. Dick Eastman of Every Home for Christ took up the charge for a global prayer center, with missions at its core. Prophet and prayer leader Becca Greenwood, another spiritual daughter of Peter and Doris, kept the witness of the prophetic ministry burning there with clarity. Persevering leaders such as Terri Brown and Mell Winger held on to the original vision, making the stand for which they had been trained all along. And the light of Colorado Springs is shining brightly once again.

From the early days of spiritual warfare through the apostolic reformation, criticism by colleagues had become a regular part of Peter’s life. I’ll never forget an indirect reference from one certain stream regarding the “present state of apostolic ministry.” It was coupled with the attempted encouragement that “the Lord is sending authentic apostles really soon.”

But I believe we will all look back at Dr. C. Peter Wagner as a Martin Luther of our age. As with Luther, or Lincoln or King or other reformers, the full magnitude of what he achieved in Jesus cannot really be seen or appreciated in this generation. Though he suffered greatly for his pioneering work, he was endued with an unrelenting, righteous “grit” that overcame each step of the way.

Even his smile was fierce. Welcoming in a way, but always conveying an innate disdain for lesser standards that dared not be provoked.

Kind of like a general surveying his troops. To his dying day and beyond, Peter Wagner exemplifies what it means to be a warrior, a genuine forerunner. I fear most in this generation have somehow extracted this quality from our spiritual gene pool. Even while claiming the mantle as an entitlement somehow deserved.

It’s not, of course. And the ministry world has suffered as a result. 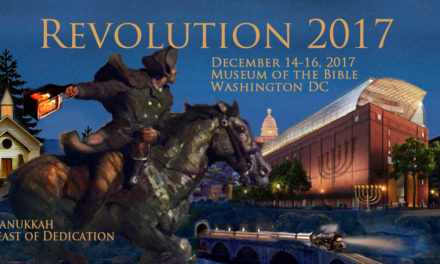 Revolution 2017! At the Museum of the Bible!

Turnaround Secured! Plus—I Lost My Wallet in Israel And…