Glory Train final week! To sow into this work of the Spirit please click here. THANK YOU FOR YOUR GENEROSITY!

CLINTON. TRUMP. Sure seems one of these Empire State leaders will rule the nation in the days ahead.

Remember the Lord clearly spoke to us that neither political party has the capacity to save America. Instead it’s going to take a move of God to dislodge the level of evil that has become embedded within our land. That’s a major reason why this Glory Train is rollin.’ And we are greatly anticipating the move of Holy Spirit this weekend in Syracuse NY with Dutch Sheets. TURNAROUND!

If you’re in the area, like within the North American continent, you don’t want to miss it.

At their convention this party actually even celebrated Planned Parenthood, glossing over the extraordinary merchandising of aborted baby parts as if this were the new societal norm. We quickly forget that Nazi Germany was held spellbound by similar propaganda, which whitewashed over the extermination of six million Jews until their machine was almost too strong to stop.

Warning! Better choose rightly here, because if we go much farther down the track we might just find ourselves in the same predicament. For real.

Awakening Anointing! Covenant with Death Annulled
By God’s orchestrations, we are culminating our Glory Train summer journey on 08-08 in Washington DC. Bringing to bear the full force of God’s turnaround train upon our Nation’s Capitol. With a three day prayer journey included!

It was exactly eight years ago to the day, on 08-08-08, when the Lord gave us a commissioning vision connecting New York and Washington DC. He showed us how He desired to connect these regions with a move of Holy Spirit awakening which annulled the covenants with death and hell that had kept the body of Christ in paralysis. As with the other directional visions we’ve been sharing over the previous week, this amazing experience continues to set our course today. Including the course of the Glory Train.

Yesterday we shared what we call “The Lowville Miracle.”  on 08-08-08 Jolene and I were in a cornfield in Lowville NY with Bill and Rita Gamela as part of a gathering to uncap a historic well of awakening. Legendary intercessor Daniel Nash, who labored with Charles Finney in the Second Great Awakening, had his church there and is buried nearby.

As we shared yesterday, Nash and Finney together broke through the antichrist idolatry of their hour— the spiritual forces behind Freemasonry—to catalyze one of the greatest moves of the Holy Spirit seen since the Book of Acts. Multitudes came to Christ in the very region we were in, as well as across the nation.

So it was a little surprising to find an obelisk on this very land, laid by Freemasons, which marked the spot where Daniel Nash had his pioneering church. What ensued was a war with hell itself. And Lowville brought our first major realization of the need to “divorce Baal” from the land and see covenant with Jesus Christ restored, with all vestiges of idolatry and claims of this craft over the land removed.

08-08-08: Vision
While in prayer literally at this obelisk, I “felt” the ground beneath me shake. A vision formed before me of a geyser bursting forth from the ground, and I knew this historic well of awakening and awakening prayer had been reconstituted in the nation.

As I continued to watch, an earthquake broke forth, splitting the ground in directly in front of me. This quake broke open progressively from the Lowville obelisk to Syracuse then through southern New York, through Pennsylvania and Maryland right to the Washington Monument in the heart of Washington DC.

And wherever the earth broke apart, babies literally shot out of the earth and into the sky. Hundreds, probably thousands of babies! In the vision these babies were being caught by angelic hosts lined up all along the way.

During the prophetic experience the Lord quickened to me that I was literally seeing the birthing of His Third Great Awakening. This grassroots movement has already begun, with the literal force of an unstoppable train. Shifting from covenants with death and a culture of death to His covenant of life!

Prayer Movement Shifts! Washington Monument Cracks!
Remember the prophecies of Dutch Sheets and Chuck Pierce about an underground river that shifts the prayer expression of our nation. From my vantage point, this groundbreaking awakening is exactly what the new move of the Spirit looks like.

And the prayer movement shifted accordingly. Just a year later, prayer networks converged nationally to visit every altar of historic idolatry and pray through the divorcement of Baal. More than 10,000 altars were prayed over, including the Lowville well. We culminated this project at the Lincoln Memorial on July 4, asking for a reconstitution of covenant with Jesus Christ. And asking God to confirm His covenant with signs following.

And 50 days later to the day, the Washington Monument cracked in an earthquake. Just as He had shown us.

You CANNOT MAKE THIS STUFF UP!

Now by God’s Spirit, the Glory Train is rumbling from Lowville NY to Washington DC. Heaven and earth continue to respond to His birth pangs as these covenants with death are annulled. Watch how New York and DC become divinely connected again in awakening, revival, glory and the justice of God. NO KING BUT JESUS! 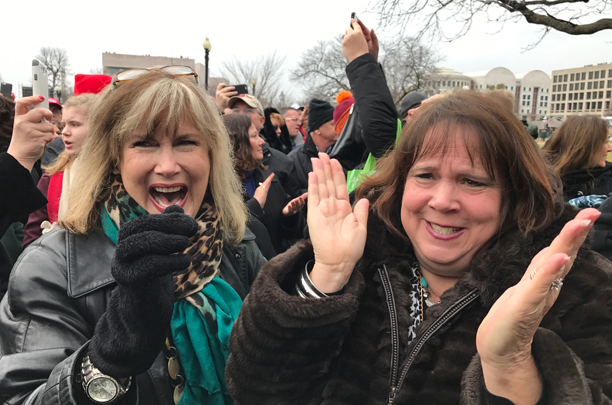 Jolene—God is Painting our Enemies in a Corner!