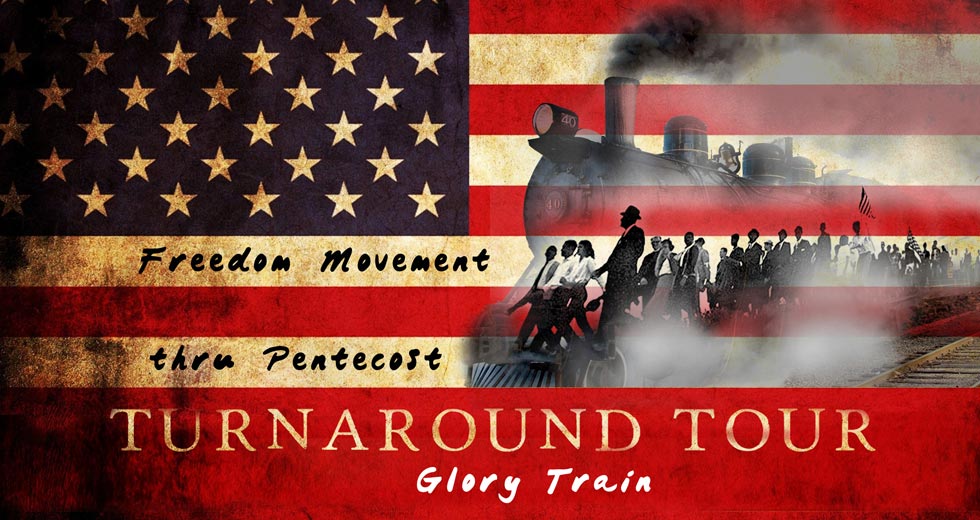 ATLANTA! So excited to see the Glory Train come to this pace-setting city, beginning on the National Day of Prayer. Connect with us:

Nation Before the Throne
Across the nation today, believers in Jesus Christ are approaching God’s Throne for grace and mercy for our land. Turnaround!

Poignantly, the National Day of Prayer also marks Holocaust Remembrance Day. It is a historic convergence, entirely appropriate for our hour of history. We are standing together for God’s dream for this covenant land of America, and for His covenant land of Israel. And in the face of the most vitriolic anti-semitism seen on the planet since Hitler’s reign, we must resolve now to give ourselves to the preservation of our freedoms so that the declaration “Never Again” will actually retain its substance.

Jolene awoke this morning with an extraordinary sense from the Lord of the importance of this date. I love that April 5 is 5-5. Double portion grace! Just as Zechariah prophesied to shout “Grace, Grace” to the mountains, so we are declaring a double portion of God’s grace to our mountains today. Even for America and Israel. Darkness must be unseated, in Jesus’ Name!

Please keep Jolene and me and our team intensively in prayer now through these next few days. We find ourselves once again as the tip of your spear of Holy Spirit-breathed intercession for our land, with a very strategic prayer journey today followed by key gatherings tonight through the weekend in this “Re-Constitution State.”

So pray for us. And call forth this Freedom Movement, this underground turnaround, now!  Speak to this movement like Jesus spoke to Lazarus. Covenant with death and hell annulled. Come forth! Call forth this move of the Spirit which marries the miracles of Exodus and the miracles of Acts to see our nation set free as awakening sweeps our land.

And lets declare together God’s promise for the land which sums up all we are standing to see. Remember how Bonnie Jones received this promise from the Lord just over a week ago when she awoke at 3:33 am.

From Jer. 33:11— “For I will cause a turnaround for the land from its captivity, so that it will be as it was at the first, says the Lord!”

Lets prophesy this! God cause a turnaround in the land from our captivity. Restore us according to our covenantal foundations in Christ so that it will be as at first! In Jesus’ Name.

Below is a key verdict from Heaven’s Court, which the Lord began to give us two years ago in Georgia when He termed this ground the “Re-Constitution State.” We received its fullness on 7-22, 2014 at Faneuil Hall Boston.

The promise inherent in the verdict is a national turnaround. And as Exodus 12:12 conveys, the judgement God rendered then is now being set into motion in the earth realm. Hallelujah!

RE-CONSTITUTION OF THE UNITED STATES | The Re-establishment of The United States According to Original Intent |Glory Procession | July 22, 2014 | Faneuil Hall Boston

THE SUPREME JUDGE
Verdicts cited in this hearing include: The Divorce Decree from Baal, Writ of Assistance, Declaration of Covenant, Life Decree, and the Liberty Charter, and others known but to God.