Note: this is one of two postings today. The second will chronicle a significant warning dream Jolene received from the Lord last night.

Jolene and I are a week away from our journey to Israel. What an extraordinary time to go!

We felt to begin today a weeklong prayer project centered on this trip. It now seems the project has taken an unexpected turn. Please continue praying for France. Pray for homeland security in America. And please pray for us as we make final preparations for our journey.

We are also asking that you consider a donation to Lamplighter as we step into this new season. Most of you know we are believing God for $8000 towards the Israel journey and the launch of the Glory Train. We are grateful that already more than $1000 has come in! To contribute please click here.

Paris, Friday the 13th—Significance
LAST NIGHT’S POSTING BEGAN WITH “Friday the 13th has now become France’s 9-11.” And this morning I want to briefly share with you insights on Friday the 13th that sheds light on why the terrorists chose this specific date and location.

It wasn’t appropriate to share this yesterday, out of respect for those who have perished and survivors whose lives have been forever scarred. But it is more than appropriate today as we begin to process and pray.

ISIS just claimed responsibility for the attack. So lets begin with a story from Fox News.

“Less than an hour after Hollande’s statement, ISIS claimed responsibility for the attack in an online statement that described Paris as “the carrier of the banner of the Cross in Europe” and described the attackers as “eight brothers wrapped in explosive belts and armed with machine rifles.”

“Let France and those who walk in its path know that they will remain on the top of the list of targets of the IS,” the statement also read, in part, “and that the smell of death will never leave their noses as long as they lead the convoy of the Crusader campaign” (highlights mine).

The banner of the cross, the crusader campaign. Both statements are direct references to the Knights Templar, also known as the Knights of the Temple, whose banner and symbol during the Crusades was a cross. The Templars were commissioned as a military army out of France by the Pope to counter Islam. They were known as “guardians of the Temple in Jerusalem.”

In other words, the Templars essentially fought against Muslim jihadists to retake the Temple Mount and Jerusalem in their day. This is so important if you are going to understand what is now occurring before our eyes.

Because on Friday the 13th, 1307, a successive Pope arrested the Templars during their convening in Paris, accusing them of longstanding practices of blatant idolatry and sexual immorality. This act to take down the Templars is the precise origin of the reputation of Friday the 13th as a day of evil.

Friday the 13th commemorates the destruction of the Templars in Paris. And that’s the precise message the terrorists sought to convey yesterday through their actions in Paris. ISIS equates today’s “crusaders” with the entire western world. And Paris on Friday the 13 became the symbol of their quest.

Who Were the Templars?
The Templars were initially known for their devotion to God and the Catholic church. But clear evidence backs up accusations that they later become corrupted by idolatry and greed.

In addition to being warriors, the Templars rose in influence by becoming “the guardians of the treasures of the noblemen of Europe” engaged in the Crusades. In other words, the Templars actually became the first prominent “global bankers” in the world. Global banking tied to idolatry and greed.

On Friday the 13th, 1307, everything changed—much as the narrative of the world has changed after yesterday’s barbaric attacks.

According to legend, the surviving Templars went underground in Scotland. Historians believe their legacy was perpetuated through secret societies such as Freemasonry etc. Ironically, the rites of initiates in this fraternal order includes rituals which directly invoke the Egyptian goddess Isis.

Three Points—Conflict of Thrones
Here are three points. First, the terrorist strike on Friday the 13 in Paris was no accident. Instead ISIS was making a very clear point—regarding what they view to be the “crusaders” of this hour, and even regarding the Temple Mount and Jerusalem.

Second clear point. Want to defeat ISIS? How about we defeat Isis—the goddess—in our own lives? Because in the Spirit, we cannot defeat what we embrace.

No true follower of Jesus Christ should have any toleration of idolatry in our lives and personal spheres. Remember the recent move of God focused on divorcing Baal. It’s past time to divorce and renounce all historic and present ties to idolatry with which the body of Christ has been compromised. “Come out of her My people, and be separate, says the Lord.” (Rev. 18:4). No King but Jesus!

Third clear point. Remember how the Lord spoke to us about this season. We are in a “conflict of thrones” because Heaven is at our gates. Break through in prayer. Remember it’s by might nor by power but by My Spirit says the Lord!

Pray for DC! Plus North Dakota and the Angel Gate 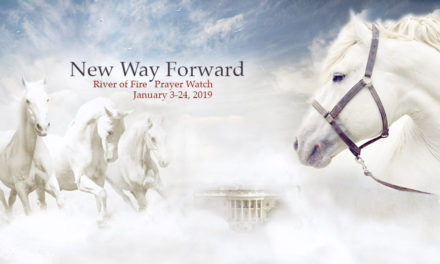 Day 2: Blood Moon Sign? “In the Third Year of King Cyrus, a Message was Revealed…”