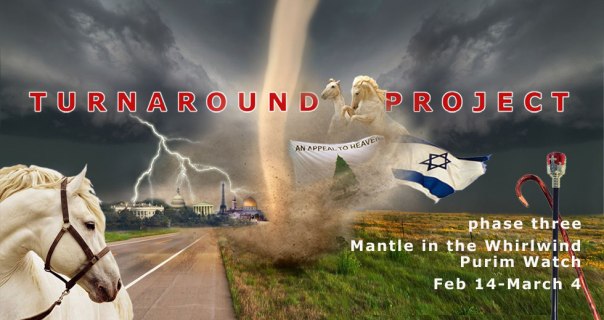 WE’RE ABOUT HALFWAY THERE! Please consider sowing towards Jon & Jolene’s Israel tour, praying onsite through the Israeli elections. You will be with us through your prayers and giving. To make a contribution please click here.

First off—yesterday’s posting from Terry Deckard was phenomenal, and your response even more so. As Terry, James Goll, Sandra Teplinsky and so many others have emphasized in our postings and calls, your intentional intercession right now is more critical than you can even comprehend. We’re going to explore this today.

Second—we are beyond grateful for your generosity towards our Israel tour. Most of you know that my birthday, March 4, is also the first day of Purim! So the Lord has made both the weight and the honor of this assignment very personal. Financially, we’re about halfway towards our goal of $4800, which will cover expenses and allow us to present donations from the Lamplighter family to ministries in Israel. If you haven’t already, please consider joining your prayers with giving for this Purim Campaign!

Netanyahu continued, “Today we have a voice, and tomorrow as prime minister of the one and only Jewish state, I plan to use that voice.” Showing a graphic he said depicted Iran’s training, arming and dispatching of terrorists on five continents, Netanyahu said Iranians’ “tentacles of terror” reached across the world.

“This is what Iran is doing now – without nuclear weapons. Imagine what Iran would do with nuclear weapons. And this same Iran vows to annihilate Israel. If it develops nuclear weapons, it would have the means to achieve that goal,” he said. “And as prime minister of Israel, I have a moral obligation to speak up in the face of these dangers while there is still time to avert them.”

The question remains, though—what is the true threat?

Israel Willing to Go It Alone? Obama Willing to Shoot Down Israeli Planes?
This Purim season, the Lamplighter family is praying for our intelligence communities towards this end. We’re taking our lead from Purim and the Book of Esther. Remember how Mordecai’s intelligence capacities uncovered plots against the King, thereby preserving his administration as well as ultimately preserving God’s covenant people.

We’ve been praying for hidden plots and emerging threats to be exposed—for the good of Israel, America and Iran. We’ve been praying that the truth of the situation, negative or positive, would be unveiled apart from all agendas.

So when the extraordinary news below broke yesterday, I wondered if the exposure was an answer to prayer. My next reaction was—how could this possibly be?

Because presuming the headlines of Drudge Report and other media are true, then President Obama threatened to shoot down Israeli jets if Israel launched an assault on Iranian nuclear facilities. Apparently in 2014 the Prime Minister and his military leaders felt that Iran’s nuclear capacities had advanced to the extent they pose an existential threat, and they were seriously considering unilateral action.

President Obama allegedly declared that any strike launch by Israel against Iran would be countered by the United States shooting down their planes. This following the advice of Zbigniew Brzezinski, a former US diplomat known for his anti-Israel stand. “They have to fly over our airspace in Iraq,” Brzezinski noted in an interview. “Are we just going to sit there and watch?”

Well, that actually seems to be what we did with ISIS in 2014. We watched as they rushed through through the boundaries of Iraq and took over the very cities our soldiers had just given lives and limbs to secure.

This makes 2014 quite a year for President Obama, and also for the expansion of radical Islamist influence in the Mideast. He refused to stop ISIS. However, he apparently stopped Israel when Israeli military determined Iran had crossed a nuclear threshold.

I dunno… Something doesn’t seem right about this equation.

What’s frightening is that Dagan, a vocal critic of Israel’s posturing against Iran, actually shares Netanyahu’s assessment of the potential threat posed by the Persian nation. From the Ynet article:

“We always said that the Iranian nuclear program could be delayed but that it was impossible to destroy it by means of clandestine operations,” said Dair. “When I came to the end of my tenure as Mossad chief, in 2011, I said that Iran would not have nuclear weapons before 2015. I don’t like to say so, but I was right.”

Like Netanyahu, Dagan insists that “A nuclear-armed Iran poses an existential threat to the State of Israel.”  He continued, “I agree more or less with Netanyahu in this regard. Two issues in particular concern me with respect to the talks between the world powers and Iran: What happens if and when the Iranians violate the agreement, and what happens when the period of the agreement comes to an end and they decide to pursue nuclear weapons?”

As in the Days of Purim
Obviously these issues are complex. Further, God promised that in the end-times, Jerusalem would become a “cup of reeling to all nations.”

But here’s a point to consider. Though the Prime Minister and the former head of Mossad are at odds over the means to secure peace, they both agree on one thing. Iran’s nuclear capacities represent an immediate threat to Israel. And the fact that Israel was even willing to put their relationship with America on the line and “go it alone” makes one thing clear. From Israel’s perspective at least, the Iranian threat is truly existential—just as in the days of Purim.

Call Tonight! Patricia's Question I Did Not Want to Answer