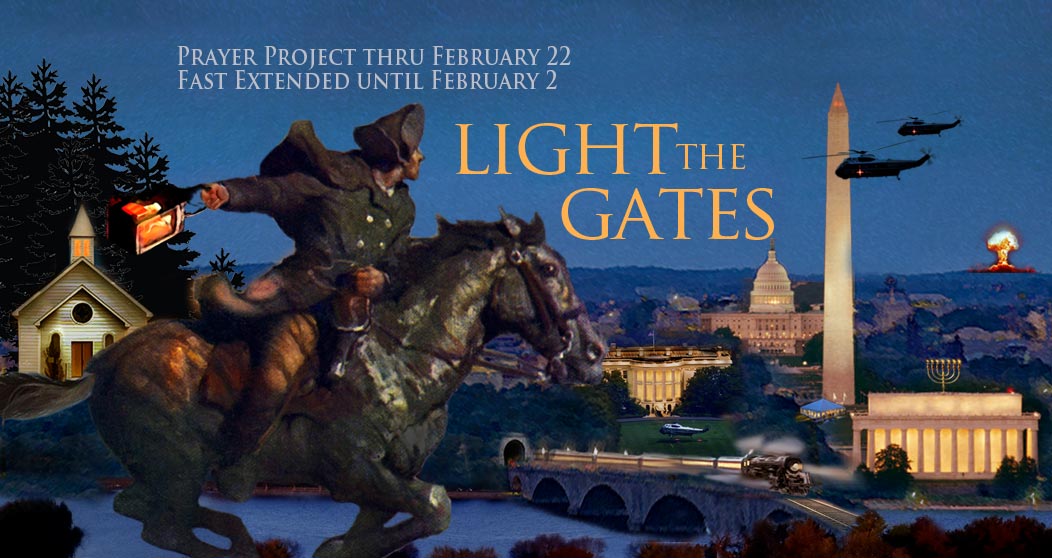 Early on July 4, 2011, it looked as though a tornado had swept through Washington DC. Broken branches were scattered precariously in the streets, from the CIA Headquarters to the Federal Reserve. Despite it being a national holiday, some of the access points into the Capitol were temporarily closed.

Tension was palpable, but also glory. We had come to take a stand unique to our generation. Prior to this, leaders in every state of the Union had sought the Lord at more than 10,000 altars of historic idolatry, divorcing Baal and renewing covenant with the Lord Jesus Christ alone. I personally do not know of a more comprehensive effort of onsite intercession to repudiate idolatry anywhere in America or the world.

And we together were believing God for the restoration of His glory.

Divorcing Baal
This historic trend was first prophesied in Hosea 2, conveying how the Lord redeems His Bride back to Himself after she falls captive to her misguided choices. Another lover woos her away from His covenant love.

The false promises are as ageless as the Garden of Eden—more pleasure, more power, more gain. But the Bride soon discovers she has become a slave to the very one she thought would set her free. And her life can only be ransomed by her true Bridegroom’s own body and blood.

What a story! Betrayal and betrothal. The power of God’s unconditional love. But for her covenant with Jesus to be restored, her false covenant with the slave-master must first be repudiated.

She must divorce Baal.

Call Nashville, 07-07-07
Hosea prophesied this end-time move of God, the journey of the Bride from Baal to Jesus. And on a National level, the “shot heard around the world” came during the Call Nashville. Led by Lou Engle on 07-07-07, the entirety of this stadium gathering was focused on initiating this end-time movement. The Call was even being held on 07-07-07 because Hebraically, the number seven symbolizes covenant.

After Lou sounded the trumpet on divorcing Baal, Dutch Sheets brought tremendous clarity with a teaching on the Baal influence in our nation. Mike Bickle shared on the romance of the gospel, calling forth the destiny of the Bride in covenant and intimacy with her Bridegroom. And Jay Swallow and John Benefiel led in prayer to begin this movement nationally.

The Call Nashville brought God’s invitation. I like to say that it’s where the Bride of Christ in America officially became engaged. But there was still a process to walk through. State by state across our Nation, before the marriage could be sealed, the Bride was required by Heaven’s Court to repudiate her idolatry.

John Benefiel and the 50 State Call
Apostle John Benefiel was summoned by the Lord to lead this charge. On October 31, 2009, Judy Ball prophesied that Apostle John must gather delegates from all 50 states in Washington DC by early December to start this process.

In a month. I remember it well, because Jolene and I were eavesdropping when Judy gave John this word. First time I had ever met the man. He immediately turned to us and said, “You’re from metro Washington DC, right? I’ll get the people to come, but why don’t you put this conference together.”

It wasn’t a request, it was an order. Did I mention it was the first time I had ever met the man.

Katherine Watsey also prophesied to Apostle John. For Heaven’s Court to be satisfied in this re-constitution of covenant with Jesus Christ, leaders must pray onsite at every known Masonic lodge and altar of historic idolatry in the nation. She also prophesied that when this work was complete, the move of Holy Spirit awakening we have so long sought would finally be released.

Restoring God’s Glory
If there was any prophetic promise more biblically aligned, I don’t know of it. God is a jealous husband, and Ezekiel 8 clearly conveys how the Lord lifts His glory when His bride embraces idolatry. Yet Ezekiel 43 conveys how His glory can be restored. Scripturally, THE PRIMARY KEY to opening this gate and seeing His glory restored is renouncing idolatry—divorcing Baal.

Charles Finney found this out when he first entered into ministry. One of his first acts was to call entire denominations to revoke their covenants with the idolatry of Freemasonry. When they repented, Finney observed that God unleashed the full power of the Second Great Awakening directly in response!

So… here we are at the precipice of the Third Great Awakening. Believing God for the restoration of His glory.

One interesting fact. Ezekiel saw God’s glory as a whirlwind, a storm wind with fire in the center and lightning flashing forth. In Acts 2, Holy Spirit came as a mighty, rushing wind with tongues of fire resting on His people. Glory restored!

Covenant Restored… Then an Earthquake!
Storm wind. Driving down to Washington DC on July 4, 2011 with Apostle John Benefiel, Negiel Bigpond and a team of leaders from across the nation, the evidence of a storm wind was all around us. And a four year period of engagement was about to be sealed with a marriage between Jesus Christ and His bride.

On the steps of the Lincoln Memorial, we presented the Lord Jesus Christ with the completed work He had assigned us. We then presented before Heaven’s Court the Declaration of Covenant, seeking our Bridegroom for His hand in marriage to our land. A re-constitution of covenant.

God thundered His response in an unimaginable way. We had stood on a word to DC by Rick Ridings known as the Nutcracker Prophecy, a promise that God would crack the hard shell of demonic resistance encompassing our Capitol. Exactly 50 days after we prayed on July 4, an earthquake rocked all of Washington DC. It measured exactly 5.8 on the richter scale. The Washington Monument, unfortunately a symbol of idolatry, literally cracked. Gargoyles toppled from the National Cathedral.

You just cannot make this stuff up. There’s so much more to this story. But suffice to say, by verdict from Heaven’s Court, covenant with Christ had been restored.

The Glory Train
Honoring this process, lets fast forward to today. On this Glory Train, the Lord is sending Jolene and me and many of you to take this train and literally circle the nation in prayer—a circle being a symbol of His covenant. He is sending us specifically because He wants a demarcation in history this year of the restoration of His glory!

It’s coming. National awakening—the restoration of His glory—just as He has promised. And remember that 222 is the gateway to the Glory Train.

Bob Jones and the Restoration of God’s Glory
Jolene and I first became friends with Bob Jones in 2006. But we had no idea until recently of the “Glory Train” prophecy that Bob and Bonnie had been carrying.

Glory Train—the restoration of God’s glory. Bob didn’t know what we were doing, and we didn’t know what he had seen. But he was carrying this end-time word, probably the most significant of the latter years of his life, at the very time we first started working nationally to see God’s glory restored.

We were all just doing our part, when suddenly our tracks converged.

The prophet was told the “Glory Train” represented the restoration of God’s glory in the land. “And then I was told to get ready for I would live to see the glory return… I had asked Him why are You pulling back the glory? And He told me because people have been marketing His glory for their own lust, their own purposes and their own plans, and He was removing it! I totally missed the glory and I told the Lord to take me home now. I just don’t want to live down here without Your glory. So He gave me this promise. He said, “You will live to see it return but you’ll be old. But you will live to see it return.”

Shortly before Bob died, he saw the glory of God come back into the Nation in a new move of Holy Spirit. The Lord showed him that the convergence of Thanksgiving with the first day of Hanukkah in 2013 marked the beginning of this new season of restoration.

This meant so much to Jolene and me, as it tangibly marked a convergence of our respective journeys, a point where two tracks literally converged together. On “Thanksgivukkah 2013,” Jolene and were celebrating our 10th anniversary, having been married on the first day of Hanukkah in 2003. Most of you know how, during our wedding, the unity candle of our menorah supernaturally lit as we were literally singing, “Glory, glory, send Your glory!”

Did I mention that “Thanksgivukkah” also marked the release of our book Crown and Throne, focusing on the kingship of Jesus and the restoration of His glory in our nation!

As I write, a train whistle is literally blowing. You just cannot make this stuff up. With all our hearts, NO KING BUT JESUS!

From the Glory Train word: “Get ready for entire cities to be saved. And get ready for the glory to shine at night like streaks of flames; like fireworks to where you’ll visibly begin to see His glory. It’s a coming glory but I don’t believe we have to wait long for it to come. I believe it’s at the door waiting and shortly it will come through.

“So be excited in these times and get aboard the glory train. For that’s the invitation of this. Get aboard that glory train and let’s ride with Him in His glory as we glorify the Father!”

Hindsight is 2020—But 2020 Foresight is Better! Call Tonight