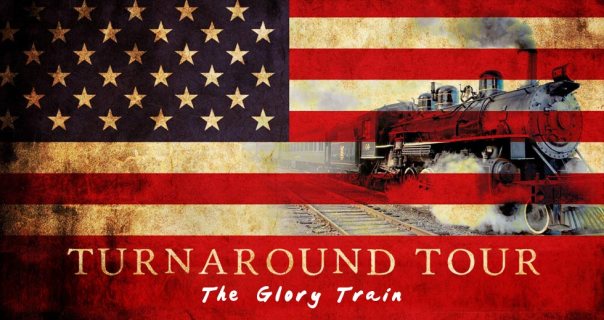 And this is the vision I had. The train had come and I boarded it. I had a ticket and a seat… I saw the Conductor come by so I asked Him, “What is this train?” He said, “This is the Glory Train!” Now I said, “Where are we heading?” He said, “To any city that wants it!”

Just a quick update that as of 2:22 today, Valentines Day, the Glory Train website is now live!

A year ago this Valentines Day, we announced the Glory Train project in a simple posting sharing the vision. We also included the prophetic word on the Glory Train by Bob Jones, who went home to be with the Lord on February 14, 2014.

We are in a season of coming full circle! As Bob prophesied, God’s glory is being restored across our Nation. And in 2016, the Lord has summoned us all to literally circle this nation, connecting our land in covenant prayer. No King but Jesus!

Signed, Sealed, Delivered—I’m Yours!
Covenant is often symbolized by a circle. Through the Glory Train journey, I believe we are literally giving the Lord Jesus Christ a wedding band from our Nation. And we are receiving His band of covenant in return! Signed, sealed, delivered—I’m yours!

March 14
Get on the Glory Train! Seattle WA

222—Through the Gates of Washington DC!