We are so excited about last night’s call with David Bradshaw. A resonance of awakening permeated our entire time together. Please enjoy the playback above. You’ll be greatly encouraged!

Today I wanted to share again with you the “Glory Train Prophecy,” an amazing prophetic word from Bob and Bonnie Jones. Please take your time and really hear the heart of the Lord through this word.

And as you read through, pay attention to promises made by the Lord that he would see before he died. Bob’s passing came unexpectedly on Valentine’s Day, February 14, 2014. Because shortly before he passed, the Lord showed him that the move of God he had been contending for all these years—the move described in this word—was now in the earth.

The Glory Train—Bob & Bonnie Jones
The following is excerpted from the Elijah List, Feb. 5, 2015.

From Bonnie Jones: Four years prior to Bob’s passing he would say that he was looking forward to his 85th birthday because, like Caleb, he would receive his promises. Bob was born in the small town of Gravelly, Arkansas on February 4, 1930. Since 2015 will mark his year of promise, I would like to share Bob’s teaching and revelation regarding his promise of the returning glory. He recorded a CD titled “The Glory Train” in 2010, therefore I’m using excerpts from it and leaving the text in the manner he spoke it so you can hear his heart and feel his spirit as you read it. It was always Bob’s desire to encourage people and bring them to a higher level in the Spirit.

A year ago I had a vision, and I waited a while to put it all together. And this is the vision I had. The train had come and I boarded it. I had a ticket and a seat. It was a very long train and it didn’t have any boxcars on it. It was all just one long, large train and you could see from the beginning of the train to the end of it. There were literally thousands of people on this train and they were all sitting down.

Then He gave me an egg. And I said, “When do I get to break open this egg?” He answered, “In 2012.” I said, “What is this egg? What’s inside this egg?” He said, “Time!” You see there was no time before man. Time was created for man. And in this egg there is yesterday’s, today’s, and tomorrow’s time. And every time you hear the train whistle it will remind you of the coming glory.” (End of vision)

So Bonnie and I traveled to some places and one of the first places was Atlanta. And when I brought this revelation a train passed by and we heard the train whistle really loud. Then we went to a restaurant and all we saw was pictures of trains on the walls. And then we went to Knoxville, Tennessee, and I brought this revelation and a train began to whistle. I noticed an artist was painting “The Glory Train.” So, I’ve been waiting for the rest of it to come together and I felt today was the day to begin to make the tape of the Glory Train.Two promises were given to me in the past when I came back from death on August 8 of 1975. The first promise was that I was to come back and touch some of the leaders of the Church to prepare them for the greatest harvest of all time, which would be one billion people coming into the Lord in one great harvest.

And then I was told to get ready for I would live to see the glory return. For He showed me a couple of months before (in 1975) that the glory was departing. And I said, “Lord, how can we live down here without the glory?” I saw the glory often in the early 70’s. I saw many men and women that had the glory on them, for they shone. They had an inner glow.

And I had asked Him why are You pulling back the glory? And He told me because people have been marketing His glory for their own lust, their own purposes and their own plans, and He was removing it! I totally missed the glory and I told the Lord to take me home now. I just don’t want to live down here without Your glory. So He gave me this promise. He said, “You will live to see it return but you’ll be old. But you will live to see it return.”

Now several of these people that I saw that really shone beautifully, one by one, I saw them fall. It was like they couldn’t handle the glory because they took it for themselves instead of glorifying the Father. So then I understood why the glory was removed. But I want to tell you something about the coming glory. It will ruin you. You will never be any good for the world again. You will live to be in that glory.

That glory is a feeling of well-being like you never had before. It’s like that glory wraps you like in a cocoon of the anointing and you can feel so secure, so loved and so wonderful. And this coming glory we mustn’t take this glory for our selfish purposes. This is why it’s been so long in returning and we must glorify God in it.

So one of the main things I see getting ready to take place with this coming glory is John 14:13, “And whatever you ask in My name, that I will do, that the Father may be glorified in the Son.” For this coming glory will be with such signs and wonders as you never seen before. Even doing greater things than what Christ did because He’s gone to the Father and made it possible for us to do this. This coming glory is to glorify one thing; it’s to glorify the Father. And this is why the Lord has been dealing in our spirit man (our conscience) all these years to bring us to a place to where we wouldn’t sell out to the world. But we would glorify the Father in everything that we do.

Back in the early 70’s wherever you walked, people would see you shining. I’m talking about those that were unsaved. They would see you shining. Sometimes they would just want to draw up close to you because they would say, “I’ve been so depressed. Can I sort of stand by you because when I stand by you I’m not depressed anymore? I don’t know what it is but whatever you got I need.”

Evangelism was that easy. It’s God’s glory! I don’t see how you could do really good power evangelism without God’s glory. And every one of these things is first and foremost in the name of the Son as He came to glorify the Father. So in the name of Jesus as we begin to move in these latter times we will see some of the greatest signs and wonders you ever seen. It’s to glorify the Father.

So get ready to lift your hands back up to Him again. Lift everything back up to Him. Lift that glory back up to Him. It’s just as when you do things right in the natural you glorify your father and your mother. I believe you’re getting ready to see the glorifying of the Heavenly Father. And I would sort of say concerning the mother; I believe the mother is the Church. God loves the Church and I believe the enemy has walls around the Church that kept the Church imprisoned. The glory is going to blow those walls down and the Church is coming out to accomplish some things it was meant to do. And the Church will experience the greatest harvest of all time that will never come to an end. So we’re in that time.

Get ready for entire cities to be saved. And get ready for the glory to shine at night like streaks of flames; like fireworks to where you’ll visibly begin to see His glory. It’s a coming glory but I don’t believe we have to wait long for it to come. I believe it’s at the door waiting and shortly it will come through.

So be excited in these times and get aboard the glory train. For that’s the invitation of this. Get aboard that glory train and let’s ride with Him in His glory as we glorify the Father. So in Jesus name these things I spoke, let it enter into your conscience, your spirit man to where you shine; an inner shining and inner glory that will shine in the darkest night that will never let darkness come in.

For you see; when light shines, darkness hides and you’re the shining light. And this is what He’s saying, “Shine! That’s your glory! Don’t put a bushel over your glory, but let your glory so shine so that man may see the glory and come to the knowledge and to salvation.” In Jesus name. Amen. 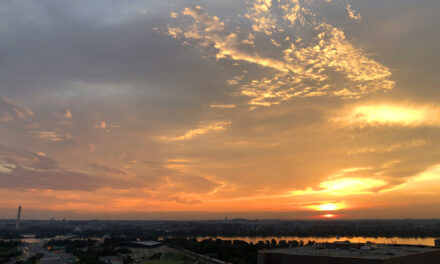 CALL TONIGHT—Your Rest Stop Becomes a Gateway out of the Wilderness!