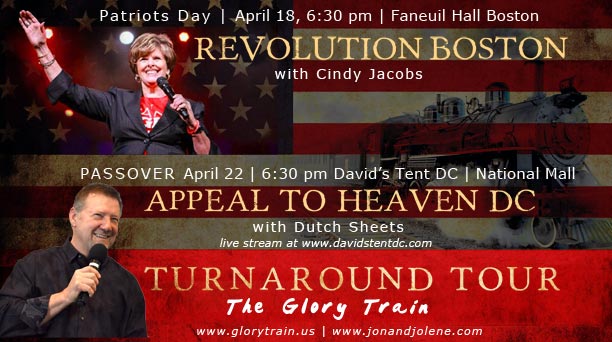 DEAR GLORY REVOLUTIONARIES,
On April 18, 1775, Paul Revere watched for signals from the steeple of Boston’s Old North Church. One if by land, two if by sea. The signals from the burning lamps brought him on a midnight ride to awaken the colonial militia from city to city. It was finally time to engage in a revolution which would forever secure America’s freedom.

Revere rode and a nation was born. On April 18, 2016 we are gathering at Boston’s Faneuil Hall, known as the Womb of the Revolution, to literally see a nation born again! We will bear witness together to the re-constitution of Christ’s revolution for America’s freedom. To welcome the very glory of God into this historic hall and this historic city and this historic state. And to commission a new breed of midnight riders—Glory Revolutionaries!

Here’s some history that will help you understand why these words are not mere rhetoric. Remember that our Pilgrim forefathers literally consecrated this nation “to the glory of God and the advancement of the Christian faith” through the Mayflower Compact. God soon moved according to this very covenant. In the 1730s, God’s glory was consuming the entire East Coast from its epicenter in Northampton MA with Jonathan Edwards. But unfortunately this same awakening was largely stopped at the gates of Boston, the emerging city of Revolution!

Boston pastors did not like the manifestations that came with the awakening. Common in those days were tears and groans of holy conviction. Saints also experienced the raw ecstasy of holy laughter, and shaking and toppling under the power of the Holy Spirit. Too much for many proper Bostonians.

As with any move of God, there was some validity to their claim that at least some of the manifestations were more due to excess emotionalism rather than the weight of glory upon the human spirit. But the ministers fellowship of that time literally forbade the “new lights” from ministering in the city. Essentially they rejected the very glory of God—the move of Holy Spirit.

And within a year, in 1733, these same pastors who rejected the move of Holy Spirit then welcomed the idolatry of Freemasonry through their gates. Even encouraging their parishioners to join! The first Masonic lodge in the western hemisphere was formed here. Masonry and Unitarianism, with their tenets that many religions form a single altar to the Great Architect of the Universe, spread from Boston across the colonies.

Remember, idolatry causes God’s glory to lift. Repudiation of idolatry opens the door for His glory to be restored.

With this decision by the Boston pastors, the fullness of the awakening soon waned. And America largely did not see the fullness return until Charles Finney broke open the Second Great Awakening by leading in the repudiation of this very idolatry!

Historians note that the First Great Awakening essentially brought America to birth as an independent nation. In the same manner that God initiated a revolution against the gods of Egypt and the government of Egypt to usher His people into freedom, it would take a revolution to birth our nation into freedom from the subjugation of that hour. The Lord desired that His very glory, the fountainhead and perpetual anointing of the First Great Awakening, to be the spiritual undercurrent and overarching influence of our new land. This was God’s original intent for both the American Revolution and for the freedom land that would be birthed from it.

Remember again—idolatry causes the glory to lift. The repudiation of idolatry opens a window for the glory of God to be restored! It is extraordinary how the Lord has orchestrated His “glory train,” bringing the restoration of His glory to the nation. Over the past seven years, led by John Benefiel and Cindy Jacobs, we have seen the largest and most comprehensive repudiation of idolatry by the body of Christ in our nation’s history. We have seen our foundational covenants with Jesus Christ restored and validated by Heaven’s court. With signs following.

O altar, o altar! Remember in 1 Kings 13 how an altar to Baal cracked at a prophet’s word. In the very same manner, on July 4, 2011 leaders from across the nation gathered at the Lincoln Memorial to present the Lord with the largely finished work of repudiating idolatry at more than 10,000 lodges and other altars of historic idolatry. Divorcing Baal, seeking a restoration of covenant with Jesus Christ apart from all idolatry. We asked the Lord as a sign to crack the hard shell of idolatry in Washington DC.

Exactly 50 days later an unprecedented earthquake rocked all of Washington DC. Our nation’s thrones of governance literally shook. Gargoyles toppled from the National Cathedral. The Washington Monument, unfortunately a symbol of Egyptian idolatry, even cracked in this earthquake!

And the Lord Jesus Christ shouted to the nation as only He can, COVENANT RESTORED.

Now it’s time for His covenant with our land to be established, with the restoration of His glory and the rapid advancement of the Christian faith.

We are gathering tonight at Faneuil Hall to see God’s original intent for America re-constituted at the very gateway of this city of Revolution. On the anniversary of Revere’s midnight ride, we are joining together to see the Glory of God welcomed into Boston and restored as the fountainhead and catalyst of today’s Freedom Revolution. A Third Great Awakening which marries the miracles of Exodus with the miracles of Acts, as Bob Jones prophesied so many years ago.

Acts and Exodus—the restoration of God’s glory, and the revolutionary move of God that ushers His people from slavery to freedom!

This is how Cindy Jacobs perceived it prophetically. We’ve had no conversations on any of this. But she prophesied just last night that we are coming together at Faneuil Hall to “marry glory and revolution!”

You cannot make this stuff up. It was Cindy Jacobs who prophesied exactly 16 years ago to me, “Jon, you are a spiritual Paul Revere. I see you holding out a burning lamp. And you are going from city to city, and instead of saying “the British are coming, the British are coming, you are saying, the Lord is coming! The Lord is coming!” She then added, “And everywhere you go, revival will break forth.”

Even now this word comes to pass.