I get frustrated with Chuck Pierce.

Just when I think “Wow, nobody’s seen this before,” I read one of Chuck’s postings and find that the news has somehow already been leaked.

Below is one such example. I stumbled across this posting while researching Tisha B’av. I thought, “Wow, this totally captures the hour. Must have been written yesterday. How did I miss it?” Only to discover it was written 2 years ago.

I pray that you will be impacted through this message–that a fiery resolution will be ignited within you to believe God’s promises and advance during this season. Just to sum up the theme, I titled the posting “Faith for Advancement.” For clarity, I have edited out references to ministry events, so you don’t do what I did and look to go to one. Which is how I discovered it was written 2 years ago.

Faith for Advancement–Chuck Pierce
Dear Pressing Through Saints:We have entered one of the narrowest times of the year.  I think we are all feeling this DIRE STRAIT time…
This is our “low point” or “high point” month, and a time when we must be very careful with what we hear as well as the decisions we make.  This is a critical time to watch and pray for Israel and Jews in the nations.  You will not want to miss this gathering!

We are presently in the Hebrew month of Tammuz.  It is not mentioned in the Bible by this (Babylonian) name—yet most certainly “the Fast of the Fourth Month” in Zechariah 8:19 refers to an ancient memorial on the 17th of this month, a time set aside to soberly remember the breaching of the walls of Jerusalem by Nebuchadnezzar.  The three-week period between the 17th of Tammuz and the 9th of Av (June 29—July 20 this year) is sometimes known as “the Dire Straits”, after Lamentations 1:3—“All her persecutors overtake her in dire straits” (NKJV).

You can make it through your narrow places ahead. In warring against the enemies of this age, we must learn how to occupy and possess. We each have a portion that we have been given. When we occupy something, we take possession, and keep possession. In Luke 21:19, we are called to possess our souls. When we possess the portion that God has for each of us, we become whole––we are fulfilled and full of peace. This is what we are actually warring to accomplish!

We must be a people who settle for nothing less than the abundance the Lord has for us.  However, there always seems to be another war in the portion we have been given! The month of Av (July/August) is traditionally an antagonistic or opposing month – a month of destruction rather than reconciliation.  Do not listen to carnal desires that would lead you on a destructive path.  Rather, listen to God and live within the boundaries of covenant blessing.  Continue on and resist every wrong path (Deut. 33:18). You have a good future!

Because this is a month of “Dire Straits”, I asked Dr. Robert Heidler to write a perspective of this time in history that has molded the history of Israel. His article on “Breaking the Ninth of Av Curse” is below.

Breaking the Ninth of Av Curse–Robert Heidler
If you study the history of the Jews you discover something surprising. The Jews have experienced many calamities over the years, and most of those calamities have occurred on same day of the year… the 9th of AV.  It was on this date that both temples were destroyed, and the final destruction of Jerusalem took place in 135.  Many other catastrophes took place on this date, including the expulsion from Gaza in 2005.

Originally, the 9th of Av was intended by God to be a day of joy and celebration.  It was to be the day Israel entered the land of promise at Kadish Barnea.  Spies had been sent in to the land, and brought back the good fruit of the land for people to taste.  But because of the negative report by 10 spies, they chose the path of unbelief, and refused to enter God’s promise.  Because of their unbelief, the entire nation came under a curse that persists to this day.  Each year, as the 9th of Av comes, the entire nation fasts and prays for the curse to be broken.  Yet true repentance has never taken place!

How do we know that Israel has not repented of the sin of Kadish Barnea?  It’s because, when Jesus the Messiah came, they again repeated the same sin!  They again tasted the fruit of God’s promise… they saw the miracles and heard His teaching… but Israel’s leaders again chose not to enter God’s promise.

I believe that one day the 9th of Av curse will be broken.  The curse will only break when the nation truly repents of unbelief, and their rejection of God’s promise.  When that happens, the fullness of God’s blessing will be released, and the 9th of Av can be restored as a day of fulfillment and celebration.

I believe this day is fast approaching.  The evidence is that many thousands of Jews ARE choosing to receive God’s promised Messiah.  They are rejecting the unbelief of many generations, and choosing to enter God’s promise!  Jew and gentile are becoming one in the Messiah as the promised “One New Man!”  Let us pray that the day will soon come when all the people of Israel can truly experience every blessing God gives!

Lana Vawser—"I Am Changing the Current and Turning the Tides!" 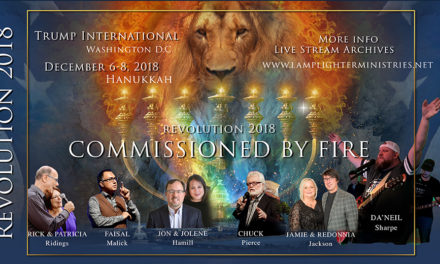 Revolution 2018—See the Conference that Made Headlines Worldwide!