Call Tonight! Mantle in the Whirlwind—Word for 2015

Over the past two days, God’s mantle for this nation has begun to be unfurled to us all. Lynnie Harlow prophesied the release of God’s turnaround mantle. Abby Abildness shared an extraordinary vision of William Penn releasing His mantle for this hour of history.

Today we are honored to share our own prophetic journey on this. We are in a whirlwind year. And about a month or so ago, the Lord spoke to me that “There’s a mantle in the whirlwind.” Below is our word for 2015, which we submitted a few weeks ago to the ACPE. Pray with us for His full release!

MANTLE IN THE WHIRLWIND—
Revolution, Restoration and the Emergence of Elijah Thrones

A sudden storm appeared a few weeks before the 2014 elections. The rain was falling like sheets—until droplets stopped in midair, and then floated horizontally across our porch overlooking Washington DC.

A tornado warning had just been broadcast throughout our building—unprecedented for the region. I was actually on my way to Davids Tent at the time, helping to facilitate 24-7 worship and prayer on the White House Ellipse, when the alarm stopped me in my tracks.

Not coincidentally, this storm was headed straight for the highest seats of authority in our land.

Riding on a Swift Cloud
Many have shared that 2015 is the “year of the whirlwind,” but this unusual confirmation honestly left no doubt. As Isaiah 19 prophesies, God is riding in on a swift cloud, and the gods of Egypt and the thrones of Egypt—tied to idolatry and corruption— are toppling.

In Ezekiel, God’s glory is pictured as a whirlwind. Ezekiel 43 conveys how this whirlwind of glory is restored “by way of the gate facing east.” We carry this dream for our own nation, to see His glory restored. So this summer we embarked on an “east gate” Glory Procession, modeled after Rick and Patti Ridings’ original 13 colonies prayer journey, to affirm the covenantal roots of our land.

We actually began this Glory Procession in the midst of a whirlwind! Hurricane Arthur formed just off the coast of Florida, and literally “went before us” all the way up the coast!

We’ll share later how, during the Glory Procession, the Lord granted our nation a “verdict in favor of the saints” (Dan. 7:22). Cindy Jacobs prophesied that we’d look back and understand that it was historic. Her word proved true!

2014 Elections—A Wave Hits our Nation!
Winds stir up waves. I don’t think it’s a coincidence that a week after this tornado, the “Republican Wave” came to define a historic election that dramatically shifted the governance of our nation.

The results reflect far more than a political trend. From ISIS to Ebola to government corruption, America has awakened to the serious challenges we’re now facing, as well as the grievous mis-steps in confronting these challenges. Our votes simply reflected this alarm.

In the midst of this, I believe the Lord has moved to preserve both our nation and the Constitutional balance of power that has been so jeopardized by recent administrations. The dictatorial tendencies of the Executive branch have at least been restrained. And “No King but Jesus” remains the cry of the hour!

Note: upholding the balance of power was the primary subject of “Crown & Throne: Unveiling the Unshakeable Throne,” our ACPE word for 2014.

God’s Verdict
I personally believe this national shift reflects a dramatic verdict the Lord granted on 7-22 at Faneuil Hall Boston during the Glory Procession. He called us to this “womb of the Revolution” to receive His Daniel 7:22 judgment in favor of the saints. It’s important to understand we did not initiate this verdict, we simply gathered in obedience to receive what He initiated.

I believe this verdict has already begun to frame our future:

“I kept looking, and that horn was waging war with the saints and overpowering them until the Ancient of Days came and judgment was passed in favor of the saints of the Highest One, and the time arrived when the saints took possession of the kingdom” (Dan. 7:21-22).

We presented our case at Faneuil Hall in the afternoon of 7-22, seeking the judgment He summoned us together to receive. We then waited for the gavel fall. In the evening service, Dutch Sheets prophesied a rebirth of our nation. Chuck Pierce called for a 90 day watch to protect this new birth of freedom, even as Moses’ parents had protected their son from abortion.

From this awesome time, we knew the Lord had rendered judgment in our favor, unto the preservation of His covenantal dream for our land. We also felt we needed to watch and pray in Washington DC through these 90 days for this newborn movement to be preserved. The tornado came exactly one week before the 90th day.

Resurgence of the Saints
Lets briefly look at Daniel 7:22, because it provides context for our time. The saints were contending against an antichrist spirit. In the midst of this challenge, they became vexed, isolated, marginalized, weary, and overpowered.

Then a verdict is rendered. Suddenly this same contingency of saints is released to possess the Kingdom!

Jesus judges, and then makes war (Rev. 19:11). In other words, He renders judgment on our behalf, and then makes war to enforce this verdict. I believe the election-day results reflect the first fruits of God’s judgment on behalf of our nation, and especially the saints of our nation. A window has opened for preservation and awakening. Against all odds, the time has now come for the saints to possess the Kingdom—to advance His Kingdom.

Countering the Free-Fall
I’m by no means implying that Republicans are the “saints” referred to in Daniel 7. But the 2014 election was actually primarily determined by the saints—by Christians of every race and denomination, united in resolve for positive change.

America has been in a free-fall, refusing the restraint that would save our very lives. Jolene actually saw this in a vision, shouting to a skydiver falling without a parachute. “You think you’re flying, but you’re actually free-falling!”

For at least a decade this has been the case. Christians have been intentionally marginalized, and in some cases even persecuted, both in government and society. Meanwhile extraordinary anti-biblical agendas have been imposed upon the American people.

Yet as of Election Day 2014, both political parties must again respect the values and influence of Christians in America.

In short, we cast our votes in alignment with our prayers: to see God’s dream for America retained and established.

We’ve divorced Baal and seen covenant with Jesus Christ restored. Where we thought we would be overcome, a window of opportunity has opened instead! God is so generous. Now that covenant has been restored, we must take advantage of this time to see His covenant established.

Mantle in the Whirlwind—5 Prophetic Trends for 2015
The “Elijah anointing” restores the hearts of the fathers to the children, the children to their fathers, and the disobedient to the wisdom of the righteous. Based on numerous prophetic encounters, Jolene and I see the revolutionary ministry of Elijah as a prototype for 2015.

The Emergence of Elijah Thrones. Jezebel gained a throne in God’s covenant land through ungodly alliances. Elijah’s throne, or seat of authority, was not given by man, but established by God.

Many forerunners in all spheres are being matured and promoted into fresh intimacy and authority this year (Jeremiah 1:10, Isaiah 51:16). Elijah’s throne not only countered Jezebel’s advances, it realigned Israel covenantally with the Lord and set a new course for the future. Tangible transformation and harvest, even in the darkest places, will come as idolatry is divorced and covenant with Christ is established.

Watch for continued exposure of corruption. Pray for the unholy alliances our nation has made to be broken, and covenantal alliances to be empowered. Pray for the emergence of Elijah thrones!

Note that Elijah’s mantle parted the waters. In his day, Elijah defended the covenantal heritage and governance Moses secured for his land and people. Elijah’s mantle released the same miracles into his generation!

In a vision I received a mantle from the Lord that was originally released to establish America’s freedom as a nation. It was being released again, even to high-level military leaders, to secure Christ’s freedom in this hour.

God wants His covenantal dream to define our destiny, both personally and as a nation, during this critical time. There’s a mantle in the whirlwind—a mantle of covenant, awakening, and breakthrough—for you to receive.

Quarantine Pharaoh
Just as Elijah prevailed over Jezebel, and Moses prevailed over Pharaoh, we are being called by the Lord to prevail over seats of authority tied to idolatry, corruption, and subjugation. This is unimaginably vital to unlocking the harvest of this hour, especially in the Muslim world.

Jesus’ own mother perceived how one of His pre-eminent callings is to “bring down (unjust) rulers from their thrones.” The church of Acts prevailed in prayer until Herod was judged, “and the word of the Lord ran swiftly.” In like fashion, the church today must stand until Christ’s freedom runs swiftly here and in the nations!

That said, it is time to quarantine Pharaoh—in whatever structures Pharaoh can be found. It is time not only to deal with those occupying the seats of authority, but the illegitimate ties in the spirit realm that influence these seats of authority—the thrones behind the thrones. LET MY PEOPLE GO!

ISIS, Revolution, and Isaiah 19. The Lord fought a revolution to free His people from Pharaoh’s subjugation. Isaiah 19 prophesies that He will do it again—and will this time include Egypt and Syria as well. He is riding on a swift cloud, and the gods of Egypt will topple!

ISIS is actually the name of an Egyptian god. No coincidence this caliphate army has claimed the very regions of the Mideast that the Lord claims as His own in this passage.

Big mistake. Watch how God rides in on a swift cloud and topples thrones tied to idolatry and brutality. Watch the emergence of a Jesus awakening along the Isaiah 19 highway, with multitudes freed and running to Jesus Christ. LET MY PEOPLE GO!

Restoring our Hearts to the Lord. Jolene had a dream this morning in Dallas where the Lord came in power and glory. People had gathered in a home, on the dirt floor of a basement. They were worshiping the Lord through tears. They had resolved to forsake artificiality, pride and showmanship, speaking instead from the heart.

When the glory of God was restored, He came to a people resolved to remain in humility and authenticity. The multitudes soon followed!

The Elijah ministry is released to turn both the nation as a whole and the hearts of God’s people. We are in the midst of a much-needed course correction, even prophetic ministry. In 2014 He turned the nation. And in 2015, we will see the Lord turning many of our hearts back to Him.

I cannot deny the weight of God’s presence enveloping our pillow talk this morning, as Jolene shared her dream through tears. Lets return to the simplicity of wholehearted, first-love devotion to the Lord.

As we return, He will return. No King but Jesus!

Avner Boskey—The Kings of the Earth are Taking Their Positions! 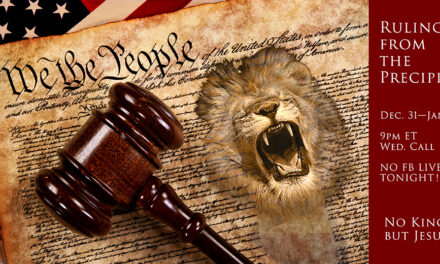 US INTELLIGENCE MARGINALIZED CHINA’S INTERFERENCE IN US ELECTIONS—Washington Examiner