RELIVE THE REVOLUTION! Sessions at http://wholeword.net

First—our sincere apologies for not making our own prayer call last week! Very grateful to Bill and Marlene Brubaker for taking the helm. In a quest to keep the momentum of Revolution 2014 going, we flew north for five nights of breakthrough meetings in upstate NY. Stepped off the plane last Wednesday evening… and into a swirling snowstorm.

A mocha latte later, we journeyed with our host and friend Randy Baker to the first meeting. Churchville NY—a beautiful town right out of a Norman Rockwell painting. By the time the storm moved on, Churchville had been buried in three feet of snow. Jolene and I were genuinely surprised that people actually showed up.

That said, between the snow, impartation and prayer, and our own weariness last Wednesday evening, time simply slipped away. My apologies again for missing the call. We’ll be on tonight, for sure.

Our Hanukkah Miracle
Hanukkah is always a landmark time for Jolene and me. We were married on the first day of Hanukkah in 2003. Most of you have heard about our “Hanukkah miracle,” when the Lord lit the center candle of our menorah during our wedding. In front of everybody! Our covenantal encounter with God has framed our life from that moment on. By the Spirit we became grafted into a legacy we barely understood, to harness and release its power in this hour.

This legacy is all about revolution. And it’s all about the power of re-consecration to launch us into a better future.

The Hanukkah Revolution
“God is changing your name. You are now Judah Maccabee, Praise Hammer!” The words from apostolic leader Sandy Newman froze me in my tracks. In part because she was swinging a hammer in close proximity while prophesying.

It was 12-12-12, and I had been asked to share on our Hanukkah journey with fellow HAPN/RPN leaders at our yearly conference. The parallels to our recent project were extraordinary. Just as we sought to divorce Baal and receive a national restoration of covenant with Christ, so Judah Maccabee mobilized spiritual revolutionaries of his day to do restore Israel’s national covenant with God.

Their very Temple had become defiled with idolatry, as Antiochus Epiphanes set up an altar to Zeus—the grecian form of Baal—and had even defiled the holy of holies by sacrificing a pig on the altar. Needless to say, the fire on the menorah had gone out.

Judah Maccabee and his warrior priests fought a revolution against the occupying powers of their day. They broke through the region’s strongest army to retake the Temple. They reconsecrated it to God, restoring covenant with God, by relighting the menorah. Though there was only enough oil to burn for a day, the menorah supernaturally blazed for eight days straight!

We are in a similar hour today. Our temples, churches, our homes and families, our work and culture have become so defiled by idolatry and sin. God is summoning spiritual revolutionaries today to catalyze a turnaround that begins with covenant restoration—with reconsecrating our lives and world to Jesus Christ, apart from all idolatry. Time for our lamp stands to blaze again!

Hanukkah 2013—Bob Jones—New Move of God
Veteran prophet Bob Jones was very dear to us. He passed on this Valentines Day 2014. We carry many of the rich promises God had given through Bob within our very being, as well as within our ministry. In fact, our book Crown & Throne is framed around the promise God gave Bob Jones in 1983 of a mighty move of His Spirit. Bob prophesied that this new move will combine the miracles of Exodus with the miracles of Acts, bringing deliverance from the Pharaohs of this age in the greatest move of the Holy Spirit ever seen in America!

I’m about to share with you something very sacred to us. Two months before Bob Jones passed on, he had a conversation with apostolic leader Che Ahn. Bob spoke to him privately that a new “wave of God” actually began during the convergence of Thanksgiving and Hanukkah 2013.

Thanksgivukkah. Further, what is really significant about this is that God told him in 1983 that he would live to see the beginning of this move. As most of you know, Bob went on to be with the Lord on Valentines Day 2014.

Longtime Lamplighter readers know we released our book “Crown & Throne” during this 2013 convergence of Thanksgiving and Hanukkah, for this very reason. The book helps to define God’s new move—a global spiritual revolution that catalyzes freedom in this hour.

That said, in 2013 God began to release a new move of His Spirit, a revolutionary  “new birth of freedom” that will impact nations for His glory. Let My people go!

2015—Year of Revolution
And now, on to 2015. I will never forget the meeting just prior to Revolution 2014 where Jim White, a healing evangelist with Healing Rooms in Spokane, spoke at the Gate DC.

I found myself frozen in my tracks once again.

Jim White shared how the Lord mandated that he let go of some things as preparation for 2015. He brought him into intensely personal dealings to disengage him from all that would sabotage his call as a revolutionary… or as he put it, a revolutionist.

May I suggest we all do the same. Take some time to enjoy family and friends, but be concerted in your effort to keep the fire burning. Do not lose the momentum the Lord has entrusted to you over this season.

Because in 2015 we are entering into a season of spiritual conflict—a season of revolution. Remember from Revelation 19:11 that Jesus judges and makes war. In other words, He first renders judgment, and then makes war to enforce His judgment in the earth.

For the past seven years we have been primarily focused on accessing the Courts of Heaven and receiving His judgment in our favor. Included in this was a divorce from Baal and restoration of covenant with Jesus Christ. Remember how Washington DC literally shook in response!

Our focus on Heaven’s Courts will only grow greater. But so also will our partnership in enforcing the judgments He has granted.

Friends, remember Faneuil Hall. The verdict has been rendered in our favor, and the Lord has granted us this year a new birth of freedom. He has re-mantled us with His warrior anointing, literally a turnaround mantle.

And in 2015, the signal from the lamps in the upper room is that He is summoning us all to ride with Him. A revolution has begun—a new move of God. Behold the Bridegroom, He is coming! You must now awaken. Rise up to meet Him!

Messenger of the Covenant, Message in a Bottle 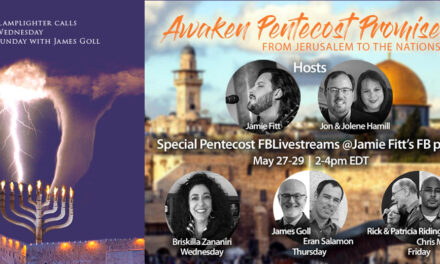 As You Take the Higher Ground, the Sharks Pursuing You will be Trapped!