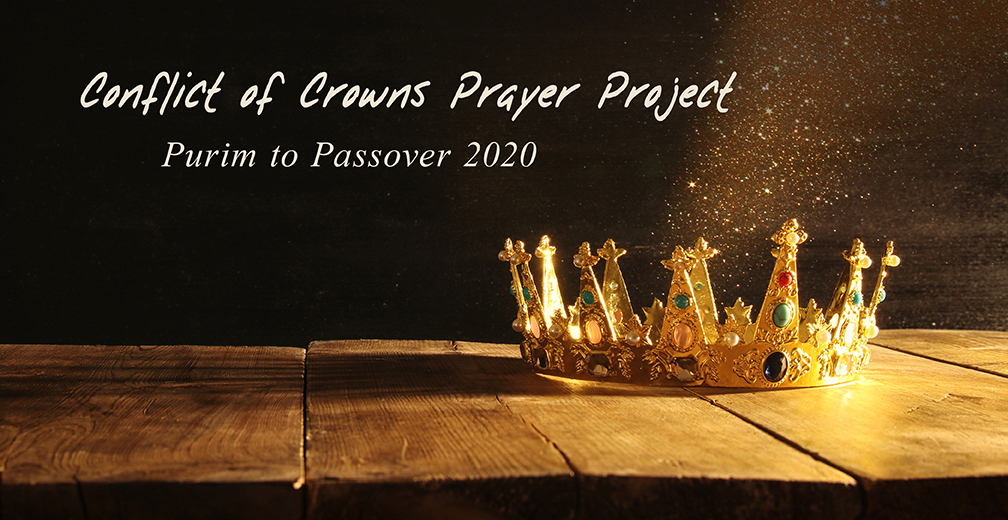 REPLAY WEDNESDAY CALL—Passover to Pentecost! The word of the Lord came spontaneously. A tangible atmosphere of breakthrough permeated the call. Note the call replay number is very close to the call number, but the last four numbers are 5155. REPLAY NUMBER (605) 313-5155 access code 552-690.

DEAR CROWNED WATCHMEN,
CHINA COVERED UP THE WUHAN VIRUS. Early US intelligence reports actually surfaced in mid-November. China soon stopped national flights from Wuhan but allowed International flights to continue without restriction. The magnitude of the coronavirus outbreak was not acknowledged to the World Health Organization until New Years Eve. On the exact same date that Jamie Jackson, out in the Spirit on the floor of the Trump International, saw the vision of the crystal crown descending over Washington, crowning God’s new movement. A conflict of crowns thus began.

April 18-May 8—the Breaker Breaks Open!
Thank God we have come to the point of turnaround. Finally! We felt it on the Wednesday call as we moved into the last day of Passover. The anointing was incredible. We felt an angelic release. The turnaround is on.

This morning the Lord spoke to me that the pivot point of the turnaround nationally and globally carries over the next three weeks. It is vulnerable and must be covered. The midnight cry to the Lord has been heard. The midnight turnaround has been substantively released from Heaven. We are now entering a time when the midnight riders are released, with the MIDNIGHT CRY as the sound of awakening in their voice. We are awakening already, of course. Our lamps are being lit. But watch how this takes on a whole new meaning as we approach Pentecost 2020.

Not coincidentally, tomorrow, 4-18, marks the 245th anniversary of Paul Revere’s MIDNIGHT RIDE. When a watchman rode, and an army awakened to overthrow the globalist empire of their day. The Breaker Breaks Open! And the time came for the promised land to be possessed.

So take a break—Shabbat shalom everybody—we will begin this new project with a posting tomorrow evening through May 8.

And then Sunday evening James Goll joins us for a special call! We talked yesterday and he’s got a boatload of significant revelation to share. You won’t want to miss!

Why May 8? It’s actually the date of what the Bible calls a Second Passover. Pesach Sheni, translated in Hebrew as a Second Passover, occurs every year exactly one month after 14 Nisan as the day prescribed for bringing the offering of the Passover lamb, in remembrance of course of the first Passover and exodus from Egypt. As described in Numbers 9, the source text for this commandment, certain people were ritually impure from contact with human corpses during their journey. They were therefore ineligible to participate.

Prophetically, the turnaround came over Passover, yet we as a nation are still contending in the valley of the shadow of death. This morning the Lord highlighted to me the call to keep watch between tomorrow and this “Second Passover.”

Are you ready? God is moving. The Breaker Breaks Open!

New York Dream—Covid, WWII Battle, Move of Spirit
Today I want to close our “Conflict of Crowns” project by sharing a very important dream I’ve been praying into privately for three weeks now. Sharing it below.

I awakened from this dream on March 25. In the dream Jolene and I were driving the New York State Thruway towards the Tappan Zee bridge for a ministry trip into New England. Traffic was very light and I knew in the dream it was because of the coronavirus. But some restrictions had been lifted.

As we were approaching the bridge, a call came from Washington DC which mandated that I turn around immediately to get back home. The last exit before the bridge was coming quick. From the fast lane, I crossed four lanes of traffic and barely made it through to the exit, nearly crashing into the barriers of the turn.

Out of the corner of my eye I saw a mall with a Target and a few restaurants right by the exit. Jarred by the turn, Jolene and I decided to take a break before going back home. We went to a local restaurant. When we stepped in the door the place was packed! I told Jolene it wasn’t safe yet to for so many people to congregate so closely.

We left, and found a second restaurant which was virtually empty in comparison. We ate a quick meal. On the way out a crowd had gathered in the waiting area. They were gathered around a child, maybe 12, in a white hat with a white blouse and what looked to be a checkered skirt. Her hair was blond. Jolene leaned in to hear. This young lady turned to me and it was like everything froze in motion except for her. She said to me, “I am Covid 2.”

I immediately pulled Jolene back out of her space and out of restaurant. I looked around, thinking to get back to Washington DC by plane. My son appeared and I took him to plane near parking lot. It was a World War II propeller plane. I hired the pilot, expecting to fly home. As we went down the Hudson River the pilot began flying aerial acrobatics over and around the New York City skyscrapers. We would shoot high into the air, and then plunge in dives and loops. It was actually an awesome experience. I wanted to continue but told the pilot I’ve got to get home to DC.

The pilot then lands the plane in New York City on a runway right in the midst of amidst a World War II battle enactment. The airbase was being bombed. Platoons and endless rows of tanks lined both sides. The pilot then tells me that a “warehouse over there” housed 50,000 WWII tanks! The pilot landed the plane, and we quickly departed.

I find myself immediately in a powerful ministry meeting we were leading. Holy Spirit was moving in power. Many were falling out under the power of the Spirit, with even entire rows collapsing on each other, even as Jolene and I and other leaders simply walked by. I was worried they were too falling too close together—actually all over each other—and could get Covid 19 if not careful.

I woke up debating. If Holy Spirit is touching them they would be protected from someone with Covid, right? The question remained unanswered.

Dream Interpretation
Let me give you a brief interpretation of the dream. First, the dream seems to imply that we will have to deal with a second round of the Coronavirus. I guarantee you this prospect can be mitigated through prayer.

America is indeed opening up. We will all soon be getting back to normal. Restaurants and malls will experience a resurgence. But we will still have to exercise continued vigilance and caution.

The name of the 12 year old girl, Covid 2, was interesting. Until researching the dream I did not know that SARS-CoV-2 is the official name of the virus that causes the Covid-19 disease. What I’m saying is that her name alone does not necessarily imply a second round. But perhaps her appearance does.

Good thing you’re praying. No matter what, the coronavirus was defeated as of Passover 2020. This defeat will be enforced.

Why Return? Because of Revival!
Why did we have to return to Washington DC so quickly? Not sure. But the clear implication was that the news was not bad. Instead, it seems that Holy Spirit was wanting to move powerfully in Washington DC at the very time I was scheduling to be in New England! We had to return immediately to help lead the movement. Watch how revival fire breaks out across the nation, even beginning over Pentecost 2020.

Our World War
Lets close with a note on World War II. President Trump has long compared the fight against the coronavirus to a world war. It is a war against an invisible enemy. And in this dream, there was an enactment of this war in New York City. The Lord mandated that we become involved before we could get home.

Obviously, no World War II battle was ever fought in New York City. But Jolene and I have often noted that dark aspects of the globalist agenda today are hauntingly similar to the globalist plan of the Nazis. To a large measure the coronavirus war, with issues surfacing where American leadership chooses either freedom or totalitarianism by government, has been a practice session for the larger battle.

Back in 2017 I asked God about President Trump after friends in Israel expressed concern about him. The reply I received was recorded in our book Midnight Cry. I clearly heard the Lord say, “Donald Trump is not a Hitler but a Churchill. And then America must ask the question, Why is a Churchill needed in this hour?”

President Trump has been nothing but Churchillian in his leadership through the coronavirus war. The false crown has been exposed and defeated, and the true Crown is emerging in breakthrough.

But as with Washington at Valley Forge, I don’t believe the true battle we’ve been training for even fully begins until after the virus has been defeated.

Shields up! And no King but Jesus… 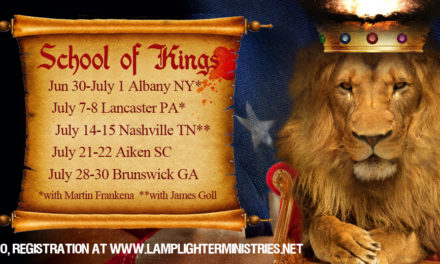 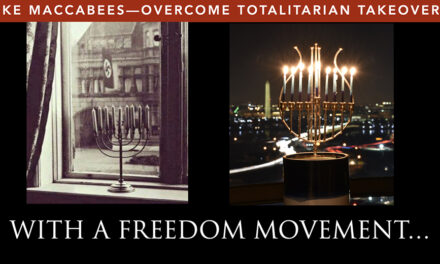