Running the Race to Win
First—Thank you for helping Jolene and me celebrate our eighth anniversary in full-time ministry. From the beginning, God called us as “spiritual Paul Reveres,” going from city to city to usher in the move of God.

Revere rode, and a nation was born. We are running this race to see a new birth of freedom for this nation! And your prayers and contributions are beyond crucial to help us advance at this time.

If you haven’t yet, please consider making an investment in Lamplighter Ministries. We are grateful!

Triple Crown June 6
Speaking of races—today I want to explore what I feel the Lord is conveying by American Pharaoh’s Triple Crown victory. For the past month or so, as much as I didn’t want it, I “knew” the race horse American Pharaoh was going to win on June 6. Every time I prayed about it, the words “American Pharaoh, Triple Crown” just came out. I really struggled to form sentences that did not convey the race as a finished work!

I believe that prophetically, two moves are being confirmed by the Triple Crown on this epic date. First is a Pharaoh movement tied to global governance. But the second and most important is a rapid acceleration of the Crown and Throne movement. A Moses movement sent by God to catalyze freedom in Christ—personally, nationally and globally.

It’s not a coincidence that the “Triple Crown” was gained on June 6, the very date Heaven authorized us to begin our Crown & Throne schools. It was great to launch in Philadelphia, the city of revolution and liberty, where Paul Revere often rode!

It was great to begin on June 6, the date Bob Jones prophesied which launched us into full-time ministry. Celebrating as well the 70th anniversary of D-Day, the 48th anniversary of Jerusalem’s restoration under Israel… and of course, Jamie Fitt’s birthday.

The last time a Triple Crown was won was actually 37 years ago, the year Jamie was born! Believe it or not the winning horse was named “Affirmed.” You just cannot make this stuff up.

According to the Book of Exodus, Pharaoh and a Jewish child named Moses actually grew up together. They were both mentored by their current Pharaoh to carry out the responsibilities of governance.

As it was then, so it is with the two movements of apostolic governance today. We see one movement—Moses—embracing spiritual revolution, justice and freedom honoring God’s boundaries, tied to the burning lamp of covenant with the God of Israel. Freedom to worship is the foundational aspect of this move. Let My people go, so they can worship Me!

At the same time, we see another movement—Pharaoh—embracing global governance tied to the false illumination of idolatry. Including the marginalization, persecution and even slaughter of God’s people, as well as moral lawlessness founded upon open defiance of the God of Israel. The ultimate intention of this false apostolic governance is to subjugate the world for unjust gain, forcing the worship of an antichrist spirit.

American Pharaoh
Lamplighter readers know that in 2008, just after President Obama won his first election, I had a dream where two very muscular, chocolate brown horses were galloping together in a White House field. Two light gray horses were being escorted off this field.

As you know, in our prophetic language horses often represent forerunners. Revere’s ride being a prime example! And the Lord was clearly showing that both the Bush administration and the Obama administration would go down in history as forerunners of catalytic change in America.

Around that same time, the Lord also spoke to me how President Obama stood between Moses and Pharaoh. He had a choice to make as to which legacy to embrace. We have been praying for the President to choose Moses ever since.

Early in 2015 we sensed a very negative shift in the spiritual climate over Washington DC. Part of this shift was a sinking feeling that President Obama had solidified his course, choosing Pharaoh over Moses. It grieves my heart even to write this.

We also felt that the same severe temptation to compromise with God was being imposed in the spirit on many other governmental leaders as well. We felt this warning especially for the new Republican Congress. Bow your knee to me and I will give…

But the Bible admonishes us to judge a tree impartially, by examining the fruit that it bears. And President Obama’s decisions seem to bear witness to his choice. From public defiance of the constitutional balance of power to his pursuit of global governance, to impositions against Israel to laws eroding the Judeo-Christian foundations of America.

Isis remains unstopped. There’s still a nuclear deal on the table with Iran that, as it stands, puts America and the nations at severe risk.

That said, make no mistake, the “Pharaoh structure” influencing our presidency and government began long before President Obama took office. In fact this influence has been there since the beginning, through freemasonry especially. Where initiates are taken through the very same rituals that Egyptian leaders went through to become Pharaohs themselves.

Think about this. Every president has been affected.

American Moses
All this said, this race is still far from over. And in the end, I’m convinced we win!

I spent most of yesterday trying to write this word on American Pharaoh. Trying to make it mean what I thought it originally meant, despite many protests from the Spirt of God within the depths of my own being. It took much time before God’s Throne in prayer before I saw what the Lord was trying to convey.

American Pharaoh might not be the “horse” that wears the mantle of Babylon and ushers the globe into subjugation to an antichrist spirit. Friends, American Pharaoh might just represent Moses, or even the company of end-time spiritual Paul Reveres, forerunners of the Lord Jesus Christ who will ride for freedom in this hour.

When he was young, Moses went through the same grooming as the guy that ultimately became Pharaoh. What’s important to note here is that God’s covenant with Moses and His people still prevailed.

Of course, it took 40 years in the wilderness and a visitation from God to free Moses from Egypt’s slavery and idolatry. The Lord took Moses through a very calculated process of establishing his true identity. While Pharaoh was practicing to become God, God was mentoring Moses to become Moses… and stand with Him to overthrow Pharaoh!

Moses became a man known by his covenantal relationship with God, delivered from all idolatry. He became free to usher others into God’s freedom. And his covenant took on a whole new meaning when the Lord literally took the hand of His people in marriage. “I AM the Lord—your God. You shall have no other gods before Me…”

My point is that His covenant will prevail with His lands and people, just as with Moses. And that’s really how this “Triple Crown Race” will end. Watch for a game-changing visitation by I AM that sweeps multitudes into the Kingdom and restores even the identity of this nation under God.

End Time Triple Crown
No matter what, a Moses Movement is now accelerating within this land covenanted to God at inception. The Reveres are riding. God is riding on a swift cloud, and the gods of Egypt and the thrones of Egypt are toppling!

Ironically, the ultimate end-time revolution to overthrow the end-time Pharaoh known as the Antichrist is also pictured somewhat as a horse race. “And I saw Heaven opened, and behold a white horse. He who sat on it is called Faithful and True, and in righteousness He judges and makes war….” (Revelation 19:11).

Nations will become genuinely free when He rides. And in freedom, the “Triple Crown” of humanity will then be bestowed on the true God of Israel— Father, Son, and Holy Spirit!

That’s how this race ends. In between now and the finish line, there’s a whole lot of ground to cover. And it’s why your prayers and investment—in Lamplighter and in many other ministries now taking a stand for the Lord—is so vitally important. We are in this race together, TO CROWN HIM AS KING! 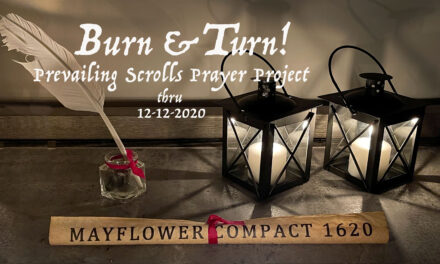 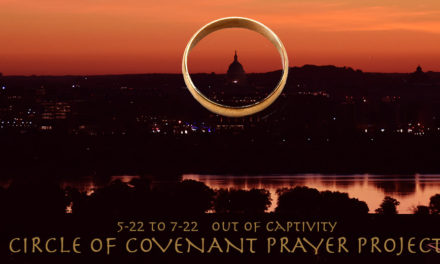 “I Will Overcome the Deficit of Justice!” Prophetic Word