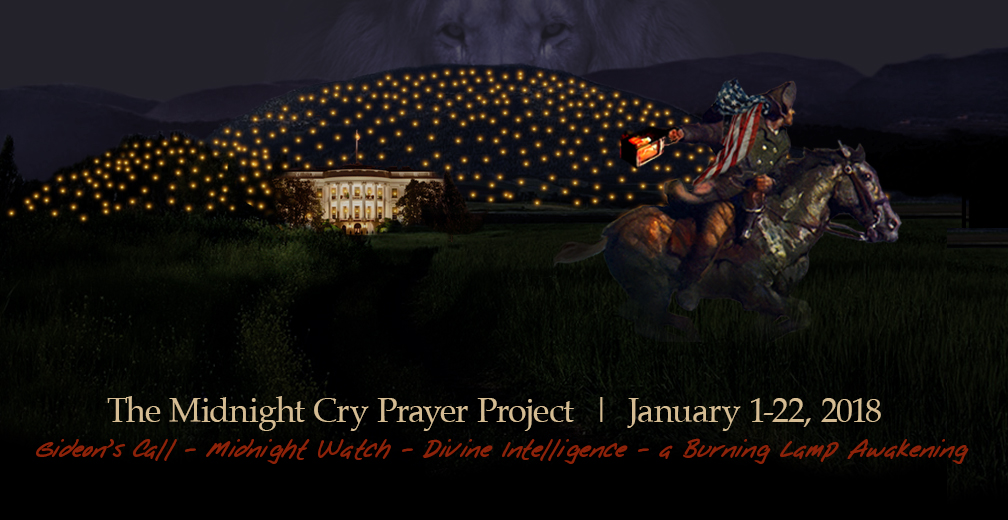 About the graphic: Gideon’s midnight cry set a mountain on fire as 300 special ops warriors blew their trumpets and thrust forth their torches. The opposing army turned against themselves. They fled. And Gideon restored homeland security to his nation. In this Gideon season we are lighting our lamps for the very same purpose.

DEAR MIDNIGHT GUARDIANS,
Welcome to the Midnight Cry Prayer Project. We are in store for a great year. Today I want to launch the project with a prophetic overview covering the next few years. Most of you know that I started writing prophetic revelation for a posting, and ended up with a book. Today’s posting will give you a summary of key themes which I believe will define much of 2018-2020.

Note that I originally wanted to hold off on this project for a week or so. Everything changed last week. Two prophetic intercessors contacted me with urgent warnings to pray for President Trump. We’ll share more later. But they both used the same exact language to describe their respective warnings.

So a major focus of this project is going to be prayer for President Trump—especially for his protection.

Gideon’s 300—Catalyzing Breakthrough & Turnaround
There’s much to cover, from Iran to Israel to the Korean conflict to securing the continued security of our homeland. Throughout this project we’re also going to explore some of the prophetic themes of Revolution 2017, with words by Cindy Jacobs, Faisal Malick, Dutch Sheets and others. I am taking seriously Jamie Fitt’s revolutionary message about a Gideon breakthrough in this season. He’s talking my language. Especially as I had just finished writing about Gideon in our book “the Midnight Cry.”

As in the days of Gideon, we’ve seen covenant with Christ restored. This reconstitution has unleashed a new alignment with Heaven’s armies. This means that at God’s leading we can now engage our enemies with new authority for breakthrough at the gates. God has promised us acceleration, and this acceleration must be protected!

The Lord is raising up Lamplighter as one of many Gideon companies assigned to bring breakthrough in this hour. For the past three years we’ve focused on Daniel 7:22, God’s Turnaround Verdict. Judgement in favor of the saints. My friend Ed Watts pointed out to me that Judges 7:22 shows us what the turnaround actually looks like. It’s all about Gideon’s breakthrough. The lamps were lit, the shofars blew, and all of the sudden it was turnaround time!

“When they blew 300 trumpets, the Lord set the sword of one against another even throughout the whole army; and the \army fled as far as Beth-shittah toward Zererah, as far as the edge of Abel-meholah, by Tabbath” (Judges 7:22).

Watch how 7:22 comes full circle this year. The Lord has ordained victory. Once again it’s time for a midnight turnaround!

Behold the Bridegroom
All this said, the most important aspect of this project is recalibration with Heaven’s heart and purposes. It’s time to behold the Bridegroom once again. As we restore our focus on Jesus, our body will organically become full of light.

So please take some time tonight to absorb and pray over these themes. It’s time for a midnight watch. It’s time for the Table of the Lord to again prevail. And beginning tomorrow, it’s time again for turnaround Tuesdays! In the meantime covenant blessings to you and we look forward to setting the course for 2018 together. The insights below are excerpted from our new book “The Midnight Cry.”

THE MIDNIGHT CRY—EIGHT KEYS FOR 2018
“Behold the Bridegroom. He’s coming. Rise up to meet Him!”

The most anticipated words in human history are described by Jesus as a “midnight cry”. They signal His imminent return. In a pattern conveyed by ancient Hebrew customs, a Jewish Messiah is coming for His bride. Messengers will be sent before His face to announce His arrival. Across the nations, this bride is going to awaken, light her lamp, and join His great procession.

Recently the Lord began to highlight “the midnight cry” to me as  a prophetic message to describe His work in 2018 through 2020 and beyond. I was at first surprised. Many who read Jesus’ parable of the wise and foolish virgins believe it refers solely to the the end times. After all, it clearly prophesies the return of the Bridegroom—in a midnight hour of history known as the end of days.

Are we really that far down the road right now?

Not yet. But as you will see, Matthew 25, the passage surrounding this “midnight cry,” actually projects not only into the end of days but into every season of renewal and spiritual revolution that God initiates. They are all rooted in these amazing words.

And we are in one of these very seasons right now. Corresponding with the 500th anniversary of the Protestant Reformation and the 70th anniversary of the rebirth of Israel, a long-prophesied move of awakening has begun. History will soon bear witness that it is of a similar magnitude to these epoch-defining events. Incorporated into God’s move in America is a dramatic, midnight turnaround from idolatry-empowered globalism which impacted the 2016 elections and ushered Donald Trump into power. This power shift has unleashed dramatic reverberations not only throughout America, but Israel and the nations as well. We’ll explore this in depth later in the book.

That said, no political figure owns the turnaround. God does. And it’s part of a much larger movement now being birthed by the Spirit of the Lord. The Midnight Cry has been written to provide you with depth and breadth to see the potential of this move, and enter into its fullness.

Behold the Bridegroom. He’s coming. Rise up to meet Him!

Ten Keys for 2018 and Beyond
Here are ten keys to the “midnight cry” of Matthew 25 which are full of prophetic significance for 2018-2020. We’re going to explore many of them more thoroughly later. The parable conveys: 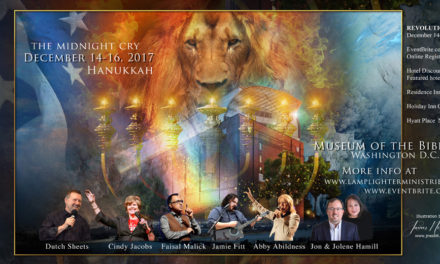 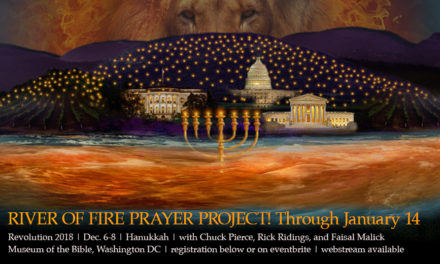 Jolene Dream: Breaking Intimidation! A Time to Declare the Truth