Warning: "continue" targeting switch is equivalent to "break". Did you mean to use "continue 2"? in /var/www/wp-content/themes/Extra/includes/builder/functions.php on line 4934
 Restoring the Headless Bride - Lamplighter Ministries

Precisely at the head of this year, two major demarcations have captured the attention of the nation. First is a shift in national justice—as Attorney General Eric Holder announced his resignation. Second is the outrage against radical Islam in America—as a woman was beheaded in Oklahoma, the heartland of America.

In a moment we’re going to share a dream by Chuck Pierce about a headless bride whose head and headship were restored. The first place Chuck shared it publicly—maybe the only place—was in Oklahoma City, not far from Moore where the tragic beheading occurred.

Two Aspects of God’s Justice
But first, I believe the Lord allowed these two national incidents because He is releasing two aspects of His justice and judgment in our land. It is no coincidence that the justice shift came on Rosh Hashanah, immediately after Cindy Jacobs’ 21 day RPN  “Stop Corruption” prayer project culminated. Remember how God rendered judgment this summer in favor of the saints (Daniel 7:22). He is continuing to bring exposure that catalyzes the justice of His restoration in our land.

“It will come about at that time that I will search Jerusalem with lamps, and I will punish the men who are stagnant in spirit, who say in their hearts, ‘The Lord will not do good or evil!’” (Zeph. 1:12). Lets keep watching and praying over this.

Second, America is awakening again to the reality of a supernatural enemy with a clear agenda to bring all humanity under the subjugation of its depraved rule. You may believe this revelation is just for America, to strengthen our resolve. We need to know—not guess—we are on the side of God’s justice. And we need to know—not guess—how to be a catalyst of God’s justice instead of Satan’s hatred.

Beheading, Islam, and Identity Crisis
From the halls of government to the battlefields of the world, an agenda has been imposed upon America to marginalize Christianity while promoting the tolerance of Islam. As the face of radical Islamist ideology is being exposed, so is this agenda.

And you know what? Much as we don’t want to hear this, this agenda has actually been corrective and empowering.We’ve been forced out of the moorings of superficiality, into an identity crisis. We’ve been forced to take ownership of our own pride, prejudice and bigotry. We’ve been forced to seek and find our identity and resolve from the King who died to redeem every tongue, tribe and nation. By this many believers in Christ have actually attained a new level of ‘earned authority’ before God’s Throne.

But the unveiling of radical Islamist ideology is not just to benefit complacent Americans. It is primarily for Muslims worldwide, who have been violently propelled into a similar quest for their own identity. Is God really like this, so full of hate for humanity? For me? If God is not like this… who is He?

That said, please face down your own temptation to revert to pride, prejudice and bigotry in the face of beheadings and terrorism. Go through the door, and find your peace in the eye of the whirlwind. Ascend before His Throne! There you will find the gleam in the eye of your Creator and the identity that can come only from Him.

Note that the posting below sharing Chuck’s dream was originally shared on March 4 of this year—my birthday. Talk about identity! And much of what was prophesied here is reality today.

Restoring the Headship of the Bride—Shared March 4, 2014
This is a season of wars and rumors of wars. We are engaged in a World War Watch. Yet it is also a time where the Lord is intent on restoring the headship of His bride in this nation, in Israel, and in the nations of the earth.

In the spring of 2013, Chuck Pierce requested for key leaders to gather in Oklahoma City so he could share a significant word from a recent dream. I’m not at liberty to share details, but the summary below conveys the essential message. Chuck made it clear that the dream was intended by the Lord to help set a new course for the prayer movement of the future. I believe this!

In the dream, Chuck navigated through layers of security in some kind of fortress— to rescue the head of the Bride. In each layer, he faced a door that was sealed with a specific digital combination lock. He had to receive fresh revelation of the new combination from Holy Spirit to gain entrance each time.

What a wild dream! The Lord is conveying a progressive journey to rescue the headship of the Bride of Christ, and restore her head with the body of Christ. This is so important for God’s work in our nation!

Gideon: Restoring Headship
We are in a season where Gideon’s torch is being restored. I believe you can see a great parallel between Chuck Pierce’s dream and the journey the Lord brought Gideon on to deliver his nation from the Usurper. Israel had been paralyzed through compromise with idolatry, with usurpers moving unrestrained through the gates of God’s covenant land. Gideon’s journey restored the headship of God, and the headship of His people, within the land.

It all began with his own repudiation of generational idolatry—his divorcement from Baal. When he tore down his father’s altar to Baal, the Lord released him into his commission to deliver the nation—and restore the headship of God’s people in the land.

Preparation for Military Victory
Gideon’s actions not only prepared him for military victory, they prepared his land for military victory. Judges 2 recounts how the Angel of the Lord was restrained from bringing God’s people into the completion of God’s possession of the Promised Land. In other words, the promises of God for their future and security were only partially fulfilled. And because God’s people ignored their covenant with Him and embraced the idolatry of the land, the angelic hosts were prevented from advancing them. Instead, their headship became compromised, with the Usurper penetrating their borders and holding captive God’s covenant land!

A generation later, Gideon’s space is invaded… by the Angel of the Lord. Gideon is commissioned as a deliverer. His first act of obedience is to tear down his father’s altar to Baal, and build an altar to the Lord. This prophetic action demarcated the lifting of God’s judgment on Israel for their idolatry, and the restoration of God’s covenant favor to release the land into a new beginning! From this time forward, covenant authority was again available to God’s people. And the Lord and His angelic hosts would once again be released to deliver the land and people from the Usurper.

Not that there wouldn’t be a battle for this deliverance. But Gideon’s act prepared the land and people for military victory, to see the headship of God’s people restored from the subjugation of the Usurper.

Truly, the time for this is now! And you will be amazed how the Lord responds with a fresh release of His Spirit, and of the angelic hosts of the Lord on your behalf. See your headship in Christ restored! Become a catalyst of His deliverance to this nation, and the nations of the earth—before any future conflict begins.

Note: Crown & Throne can help guide you through this process of restoring covenant with the Lord Jesus Christ—so vitally important for you personally, for your family, profession, and your region! Order at http://lamplighterministries.net 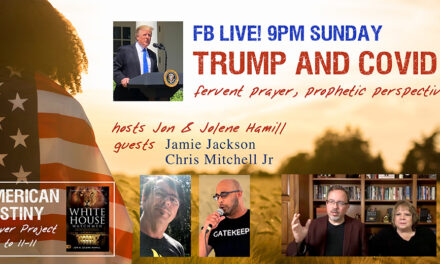