DEAR MIDNIGHT SHINERS,
FIRST—TODAY’S A GREAT DAY to join the Revolution! Either by connecting with us live at the Trump International Hotel or by joining us via webstream. Lets gain His 2020 vision. Through Jesus, the future is yours to define.

SECOND—Note that in addition to tonight’s call, we will have a special call Sunday with an overview of Revolution. We will review key details and take your lingering questions.

12-12 Defines 2020, and even Revolution 2020
THE PREVAILING WORD from Washington is actually not “impeach.” Instead it is RAPID TURNAROUND. Prophesy this today! Remember this was the word given by the Lord a week ago as we entered into the midnight hour on 12-12.

Today in prayer I sensed the Lord emphasizing this again. That He orchestrated that 12-12 defines 2020, and even Revolution 2020.

The Angel, the Midnight Shining, and the Revelation Road
Last Wednesday, Lynnie Harlow received an angelic visitation in which the full moon at 12:12am was conveyed as a sign of God’s rapid turnaround. This angel showed up at the door to her hotel room at the Founders Inn in Virginia Beach while she was resting.

This angel was perceived by Lynnie dressed in white and gold, and bowing to the Lord in prayer at the door. The only thing that moved him from this posture into action was the word of the Lord. The Lord spoke to her that this angelic host was an angel of revelation.

Remember we started 2020 with a similar prayer call on January 20-21, with a “blood moon” appearing over Washington DC at exactly 12:12am. This date happened to precisely mark the third year of Trump’s inauguration. The Lord emphasized to us Daniel 10. “In the third year of Cyrus a message was revealed…” Daniel fasted and prayed 21 days until the angel of the Lord broke through with revelation that defined each successive generation, and even what we call the end-times.

Beloved, since this time, for an entire year we have been engaged in 21 day prayer projects modeled after Daniel’s example, with fasting as directed by the Lord. We have sought His governmental breakthrough. We have sought His revelation. And we have asked the Lord to grant that His angelic host take the lead of this freedom movement from the pattern of Exodus 23:20-22.

“Behold, I am going to send an angel before you to guard you along the way and to bring you into the place which I have prepared. Be on your guard before him and obey his voice; do not be rebellious toward him, for he will not pardon your transgression, since My name is in him. But if you truly obey his voice and do all that I say, then I will be an enemy to your enemies and an adversary to your adversaries.”

Then suddenly as we were preparing for the “Midnight Shining” call, an angel of the Lord appeared at the door or threshold at the Founders Inn.

As in the days of Daniel, this angel of the Lord is specifically an angel of revelation. And he is here to advance Jesus’ movement in our sphere! Here are a few points.

Breakthrough Revelation. First, this very fact shows that the angel of revelation is an angel of breakthrough. God is giving breakthrough revelation for 2020. I will say that God has summoned us for Revolution for this very reason. Of course we will pray for President Trump. But Revolution is not about electing a president, it is about enthroning a King. And His governmental glory is moving!

Foundational Work. I believe the Founders Inn was chosen for this visitation specifically because the work the Lord is doing is foundational for our nation. The Lord is restoring us to His original intention beginning with covenant restoration. It is no coincidence that the angel of the Lord showed up at the very Inn where I saw the gavel fall for covenant restoration after 400 years of slavery. Virginia Beach has become a prototype for our nation.

Cross the Threshold. Third, the angel of the Lord showed up at the door or threshold because he was assigned to move us across the threshold on 12-12. Virginia Beach represents the middle point of the geographic east gate of our nation. It’s where the gateposts connect and open for God’s governmental glory to enter.

Jacob wrestled through the night with an angel of the Lord at Phanuel. He then had to move across the threshold at daybreak to secure his inheritance. Joshua also experienced his commissioning in an midnight hour, an hour where Moses was taken. He was legitimized, authorized and anointed to cross the threshold for Israel to secure their inheritance.

It is the same with us. This whole year has been a midnight wrestling, defined by a midnight shining and a midnight turnaround. It is bringing a midnight victory. Revolution is among many gatherings called to bear witness to the crossing of this threshold into 2020 into our inheritance.

Reverence and Revelation. That said, the fourth point is the most important of all. When Lynnie described the angel of revelation, she emphasized above all his resolute posture before the Lord. This angel remained reverent, bowed and unmovable in his focus on God. He moved only according to the description or directive given by the word of Lord, in this case through Lynnie.

I want you to see this. The angel of the Lord was modeling for us the fierce reverence which catalyzes breakthrough revelation. For us to gain all the Lord desires for us, lets assume this same humble posture. As we approach 2020, stay humble before the Lord and remain focused and watchful in prayer. Receive His revelation to set your course.

Because the Lord is moving us all across the threshold, into His governmental glory.

The Ultimate Midnight Shining
Remember, the road through 2020 is a Revelation Road. To close our post lets go back to the beginnings of beginnings, in which the ultimate midnight shining took place. Revelation was released which shifted Israel and the nations of the earth into a new era. Here’s an excerpt from our book “Midnight Cry,” Chapter 1.

The very end of this age culminates with a midnight cry. But it began with one as well.

Some two thousand years ago in Bethlehem, Israel, a pregnant teenager groaned while giving birth inside a darkened cave. Her burst of agony was immediately followed by the midnight cry of a newborn child as He drew His first breath on the earth.

Not far away, a few rugged herdsmen were keeping watch over their flocks. They followed in the footsteps of David, Israel’s greatest shepherd, who once traversed these very same fields. The barren hillside was soon overtaken by a shining messenger. An angel of the Lord suddenly stood before them.

The manifest presence of God—His very glory—encompassed these shepherds like a fire. Even the fiercest feared for their lives, but no one dared run. No one dared even move.

“But the angel said to them, “Do not be afraid; for behold, I bring you good news of great joy which will be for all the people; for today in the city of David there has been born for you a Savior, who is Christ the Lord. This will be a sign for you: you will find a baby wrapped in cloths and lying in a manger” (Luke 2:9-12).

This child in a manger was Israel’s long awaited Messiah. The Son of David. Born in a midnight hour as the Light of the world!

The magnitude of this message must have seemed impossible to understand. But it was immediately backed by Heaven’s visitation as thousands of heavenly hosts suddenly appeared, shimmering like lamps or lightning on the same barren hillside.

“Glory to God in the highest! And on earth, peace among men with whom He is pleased.”

Following the angel’s instruction, the shepherds embarked on a midnight journey to behold the newborn Child. A mother’s groan, a baby’s gasp, praises to God reverberating through the hills of Bethlehem as God’s greatest gift was given to mankind.

For thousands of years since, the very echoes of this “midnight cry” have awakened our hearts. And they compel us to rise up and seek Him today. 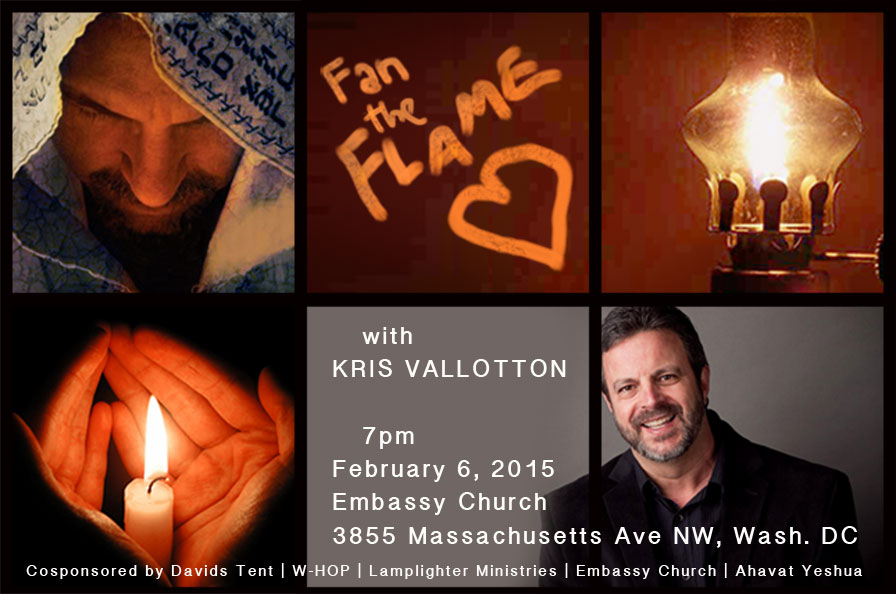 Kris Vallotton—Fan the Flame DC! One Week from Tonight

Midnight Wave and the Third Intifada

Call Tonight! Fake News vs the Council of God