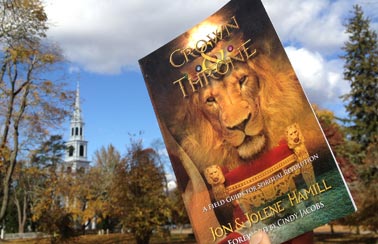 Pre-release of book arrives! Pease pray for us as Crown & Throne CT begins

CROWN & THRONE CT begins Tonight! If you are in the area, join us for this strategic time! A special pre-release copy of the new book “Crown & Throne: A Field Guide for Spiritual Revolution” will be available for those who attend. Our New England schedule now through Monday, November 11 is at right.

What a day for our New England journey to begin. Last night Billy Graham gently confronted America’s sin and called for another spiritual awakening. Today Israel is expressing outrage as the ‘Deal of the Century’ with Iran for Mideast peace is most likely sealed.

More on this in postings ahead. For now lets just say TODAY through Monday is a hinge of history. And there is no better time to honor and empower our Nation’s covenantal foundations in Jesus Christ!

His Mouth is Over Connecticut!
We hope you are drawing inspiration from the prophetic perceptions shared here these past few days. What a joy to recover these words for review. With our ministry in Connecticut through the weekend, Patti Ridings’ word for the state was literally like discovering a buried treasure. Truly, a voice from the past that is now defining the future!

“Much of the great preaching of both GREAT AWAKENINGS was in CONNECTICUT, where we had one of our most powerful times of intercession. We proclaimed Jeremiah 1:9 on a busy street corner in Hartford, in front of a statue of Thomas Hooker, an anointed man of God, and felt that God spoke to us there about HIS MOUTH BEING OVER CONNECTICUT”—Patti Ridings, 1997

God’s mouth is over Connecticut! I was quite literally stopped in my tracks by this word, as He led us here at this time. Remember the promise of intimacy and kingly, governmental authority God is releasing in this Crown and Throne movement. Jeremiah 1:9-10 directly conveys this very invitation!

“Then the Lord stretched out His hand and touched my mouth, and the Lord said to me, behold I have put My words in your mouth. See, I have appointed you this day over the nations and over the kingdoms, to pluck up, and to break down, to destroy and to overthrow, to build and to plant” (Jer. 1:9-10).

Lamplighter family, we together have been led by the Spirit this year through the “birthing process” of a new move of God—a new birth of freedom. God called Jolene and me to write our first book as a signpost for this coming move. Well, as of last night, the first hundred “pre-release” copies are now here. By orchestrations only the Lord could make, Crown and Throne is being released in the state where Christ’s mouth was positioned in Patti Ridings vision. Where Rick and Patti Ridings, now leading the 24/7 Succat Hallel in Jerusalem, saw the Lord release Jeremiah 1:9-10.

Pray with us that the Lord’s voice will resound through Crown & Throne. Pray that multitudes will be mentored by God in the Crown and Throne reality of intimacy with God and governmental authority pictured by Jeremiah 1:9-10. Pray for people attending to become awakened and equipped for this sacred mandate! Pray for a new breed of Holy Ghost revolutionaries to be released! May God’s call for spiritual revolutionaries and covenant restoration be a shining light to counter the enemy’s darkness.

Connecticut: Grief and Glory
Truly this is not about us. God is giving us all a signpost at this kairos time to confirm His work in our midst, and in the region. Remember how Connecticut gripped the soul of our nation late last year, as we grieved over the senseless murder of innocent children in a Newtown elementary school. A heartbroken nation prayed and reached out. Our living rooms became extensions of Connecticut church halls, watching as local pastors extended the heart of Jesus Christ to mothers, fathers and traumatized children.

And throughout 2013, the body of Christ in Connecticut rose up with a resolve unprecedented since the days of historic awakening. Pastor Rick McKinniss and his congregation, Wellspring Church in Berlin CT, stepped out on a word by Chuck Pierce and summoned Connecticut to pray. From September 4—October 14, more than 100 congregations participated in 40 days and nights of continual prayer! Night by night—in steepled village churches, storefront worship centers and mega-churches across Connecticut—the lights came on.

Jolene and I are not here so much to bring the Light as to bear witness to its shining, and perhaps bring further clarity to what God is already doing. That said, the mouth of Christ is truly over Connecticut. We personally are utterly convinced that Connecticut and New England will be at the forefront of this emerging national awakening. And it’s just like God—in His justice and love—to release this move of His Spirit out of the tears and travail that ushered us all into the year He called the new birth of freedom.

“Lazarus our friend has fallen asleep, but I go that I may awaken him from slumber”—Jesus defines awakening, John 11:11.

The Trump Turnaround—A Revolution Has Begun